locked down in surprise 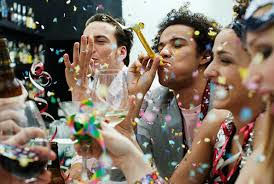 Locked Down in Surprise

The lights come on when you walk thru the door and there’s a room full of people with tears of laughter in their eyes, slapping their thighs, beside themselves with merriment.

What could the occasion be? It’s not your birthday, and you divorced years ago and never remarried, so it’s not your wedding anniversary. You haven’t had a job promotion in ages, so it’s not that. And your novel hasn’t been published. Actually, no one knows about your novel, no one close anyway, no one who would organize a surprise party even if it had been published. And that’s what they yell out in robust unison: “Surprise!”

Then they go back to laughing.

You stand there like an idiot clutching your briefcase to your chest, wondering how they got in, wondering who they are. There’s not one familiar face in the room.

You’re alarmed by the laughter, it’s not subsiding, in fact it’s escalating, and some of them have dropped out of their chairs and are rolling around on the living room rug, their knees pulled up, even women in short skirts.

And where did all the chairs come from? A good thirty of them, identical folding chairs, the kind you rent.

They’ve arranged themselves in such a way that you can’t go further into your apartment without working your way thru the chairs, and you’re hesitant to do this.

A grin spreads over your face, as if this were a legitimate surprise party. Then the laughter stops abruptly and they stare at you, some of them still in their chairs, but most of them on the floor.

One by one they get up, brush themselves off, and slip past you out the apartment door, which is still open.

The last to leave is a thin man in a rumpled suit with a string tie and bad breath. He cups his hands to your ear and whispers something, but you can’t make out what it is. It’s as if he’s whispering into someone else’s ear. And then he is gone too.

Their footsteps echo down the five flights of hallway stairs, and then the front door slams shut behind them.

Tagged as John Bennett, Locked Down in Surprise, Poetry, shards