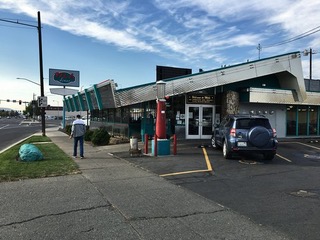 Out of boredom I leveled a blast at editors who reject poems if they use the ampersand for “and” and in the process I spelled ampersand ampersant, which information these editors delighted in sharing with me.

But, in my defense, there is such a word as ampersant, it’s a kind of knot, and knots are what I’m rapidly tying myself in here. But hey, watch this: presto! With one well-practiced gyration I slip all the knots and stroke for the surface of this water-filled tank in which I’ve been submerged and in which a rapt gathering of grammatically correct onlookers was hoping I’d drown.

And now, fanatasies by the wayside, here I sit, writing this in the blue-collar bustle of Mel’s Diner in Yakima after a visit to the V.A. medical facility, an annual ritual that began years ago when I first plugged into my V.A. benefits after my body started unravelling.

Mel’s is the kind of place my roots are sunk in – a dirt-poor childhood on Long Island sandlots, teen years in Cheyenne picking potatoes by day and setting pins in a bowling alleys at night, factory and construcution work in Connecticut after that, followed by three years in the army, and then tending bar in a string of honky-tonk bars in New Orleans and San Francisco. Here and there I made a stab at “higher education” until I threw in the towel on that pipe dream too and locked in on finishing my days as a window cleaner.

Mel’s is where I land after the agent-orange waiting room at the V.A., and since I’ve been sitting here I’ve been called hon 12 times by three different waitresses and my coffee cup hasn’t once gone empty. It’s a good place to chow down on pancakes and sausage after the prying and probing, a good place to say fuck cholesterol and ampersands, blood pressure, Dacron arteries and a fast-shrinking longevity. Mel’s is a good place to give the finger to a world turning robotic.