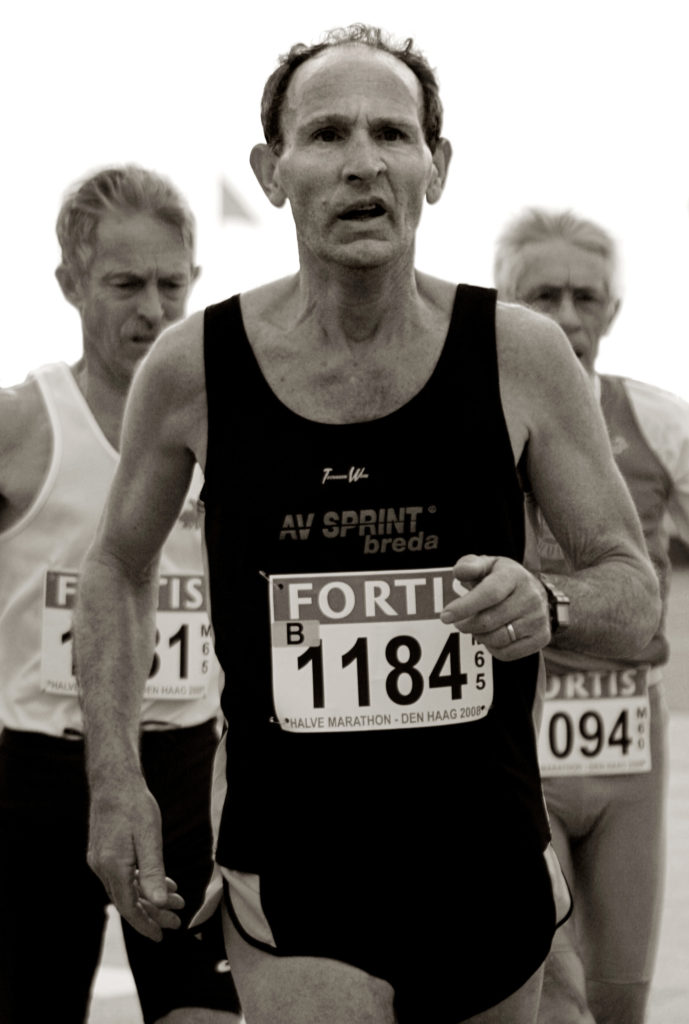 Running on empty. Running to beat the band, the wild-eyed posse, the lean hounds of hell. Running up the down staircase. Running into a wall, an old friend, a bloated predicament. Running the flag up the pole, running into trouble, debt, the Phantom of the Opera on a park bench in broad daylight. Running the San Francisco Marathon.

That was back in the days when I hustled college kids in bars, got them out on the track at midnight for a three or four mile race on a $50 wager. I was in my 40s and living life in the fast lane.

When I first started running my hair was coming out in clumps and my heart was beating so hard I could see the sheet jumping when it woke me up at night. I needed to get in shape.

The first day I ran from my front door to the corner and passed out.

The second day I collapsed at the corner but stayed conscious.

In a week I was up to a mile and after a month I ran my first 10-K and finished neck-and-neck with a 70-year-old woman.

Within a year I was placing first in my age group and that’s when I started hustling college kids. I kept right on drinking.

I’d never run more than ten miles when the San Francisco Marathon bets went down. I was sitting at a table full of crazies in the Cornerstone Tavern and Big Billy asked me if I’d ever run a marathon.

“How much?” said Big Billy.

“Fuck, Billy,” said Tall Ed, who was just out of an Idaho prison. “Of course he can finish. You gotta bet him on how long it will take him.”

“Big Billy,” said Tall Ed. “How the fuck have you managed to survive this long?”

“In three weeks,” I said. “In San Francisco. I’ll run the San Francisco Marathon in under three hours and fifteen minutes.”

“I’ll take $50 worth of that,” said Sweetness, and then everyone at the table began putting their initials next to dollar amounts on beer coasters.

I woke up the next morning on the floor in front of the wood stove, fully dressed. I had no idea how I got home. I threw some cold water on my face, changed into sweats and running shoes, and went out the door to begin training.

I did the marathon in three hours fourteen minutes and nine seconds, and a week later my wife left me.