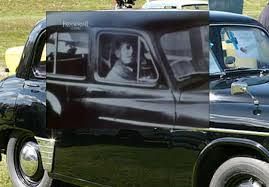 I’ve just had a visit from the Committee. They’re looking the worse for wear. They’re looking old. The short one, Carl, is bald except for a few long strands of hair that he’s spread over his skull in an attempt to hide his baldness. The tall one, Fred, has a hearing aid and thick glasses and walks with a cane. They tried coming straight up the incline but couldn’t make it. They had to go down to the far end of the park and use the stone stairs. By the time they reached my car they were out of breath and I was in a jolly mood from watching them. I rolled down the window. It’s windy and cold, and Carl and Fred were bundled up. “Hey, guys,” I said.

“The word’s out on you and your wimpy hill Shards,” Fred said. “Our In Box is overloaded with hate mail. Enough is enough, people are saying. You’ve got no respect for national holidays. For the poor working stiff.”
“Is that the best you guys can come up with after all these years?” I said.

Protect me! What a joke! But it made me sad to hear Fred say it. When they were younger, they had pluck, Carl and Fred. Their lies and distortions were outrageous and colorful.

“There’s a new Committee,” Carl said. “It’s gaining strength by the hour. Their membership is young and their Leader is old and sly. They call him the Masked Man.”

“No one’s playing by the rules you play by anymore,” said Carl.

“Some day my prince will come,” I said.

“Easy, Carl,” said Fred. “Back off. He’s going into Shard mode. Don’t engage him when he’s in Shard mode.”

“He was down for the count!” said Carl. “He was finished! And then he came up with this Shard business!”

Carl wasn’t listening. “This new breed is going for your juggler, pal!” he said. “They’re in the process of gathering all your published and on-line Shards and they’re going to rewrite them according to new guidelines. They’re going to make you into something you’re not and then declare you Poet Laureate of Mediocrity! How do you like them apples? There’s some Ninja guy involved, second-in-command to the Masked Man. And their Committee Chair, his every word is pure generic and stripped bare of originality. He’s already set the bar high by tackling your most incomprehensible Shard and rewriting it so that even an inebriated skunk can understand it!”

“You don’t get it, do you?” said Fred. “The Masked Man will flatten you like road kill.”

“Ho!” I said. I knew I should be taking this new Committee more seriously, but I was getting excited by this sudden burst of one-liners from Carl and Fred. I realized I’d missed seeing them.

“Hey,” I said. “Don’t worry. It’s all going to be okay. It’ll all come clean in the wash. You guys look cold. Jump in back and warm up. We can drive around. I’ll show you where I get my mochas. Hell, I’ll even buy you one.”

They exchanged looks again, and then they climbed in.

Their eyes in the rear-view mirror were the eyes of frightened children.