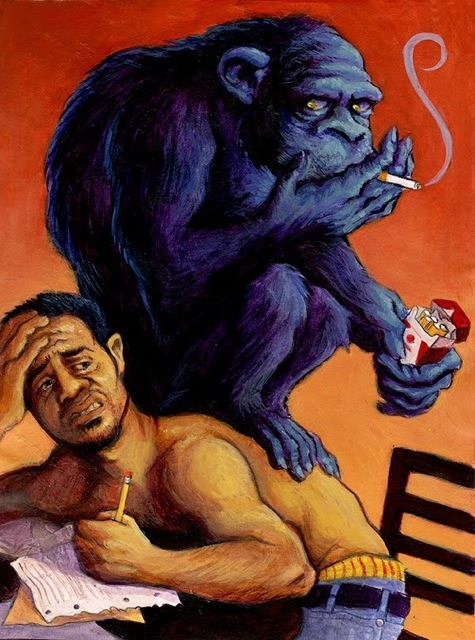 They suspected he was lying about all of it, about the sleeping pills, about his resolve to turn over a new leaf, about his escape from Ecuador on a balsa-wood raft with a leopard-skin sail, and about his conversion to Catholicism.

“Why Catholicism?” the interrogator asked.

“What would you do in the middle of the ocean on a raft made of coconuts tied together with knitting yawn?”

“Coconuts is it now!” said the interrogator. “You’re in way over your head!”

“Way over my head indeed!” he said. “Forty fathoms of ocean under me, surrounded by icebergs, polar bears everywhere. The voice of God screaming in my ear…”

“Listen to what you’re saying!” the interrogator said. “Can you hear yourself?”

The interrogator was not distracted. “How many sleeping pills did you take?” he asked.

“We have evidence to the contrary,” said the interrogator.

“Oh, that. Who gave you permission to pump my stomach?”

“You were out like a light,” the interrogator said, “bobbing around Lake Merritt in Oakland on a rubber raft, stark naked with a spider monkey on your back!”

“So?” he said. “You probably snatched me off an iceberg and planted me there! Can I call my lawyer now?”

The lawyer said he should plea bargain. If he owned up to the sleeping pills, they’d let the rest slide–the polar bears, the icebergs, the monkey and the discrepancies around how the raft was put together. Even the voice of God screaming in his ear and his sudden embrace of Catholicism, which they saw as a way to get the Pope involved.

“The pharmaceutical industry’s behind this,” he said. “Sleeping pills are over-the-counter and they want someone to write a script for something more expensive that will wipe out my dreams. They don’t want me having dreams! They’re afraid I might create icebergs off the coast of Ecuador. Afraid I’ll sabotage the global economy, sink oil tankers and fishing boats!”

“It’s either plea bargain or do time,” the lawyer said.

“Get real,” said the lawyer. “What peers? Just swear off the sleeping pills and sign the confession. Go back to Ecuador. Lead a simple life. Marry a native.”

“I think I can get them to let you keep the monkey,” said the lawyer. “But they want an answer by morning.”

Tagged as John Bennett, Poetry, sleeping on it