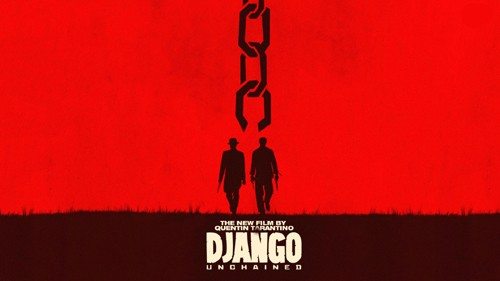 Imagine if the movie of the year showed a hot little butter-blonde drowning in a pool of King Kong’s semen. Hold on now, don’t get your tail in a knot, please take note that there are no weapons involved in this scenario, no assault rifles and dead children scattered all over the pavement, no computer-game drones dealing out impersonal death, no flame-throwers, no neutron bombs, atom bombs, stun guns, ray guns or unholstered police pistols, none of that stuff. Just a great pool of gorilla cum with a pretty lady splashing around in it. Which is apparently more horrifying to some people than an airport being blown to smithereens by a terrorist bomb.

Where violence is concerned, the line between fantasy and reality has more than blurred. The two worlds have commingled. They’ve become symbiotic. Hollywood makes war and war makes Hollywood and the NRA supplies the guns. And snapshot noble causes choked with emotion are the flimsy justification for it all.

Django Unchained is a high-potency stimulant for this ongoing process of violent fantasy/reality melding; in this regard, Tarantino is a master. The fantasy shoot-out at the end of the movie where scores of people are blown to pieces by high-octane fire power (someone should time the shoot-out’s duration, it must be at least five minutes) gives us something to aim for–in our malls, in our schools, in Iraq and Afghanistan. And in the grand finale–Django has somehow wired a plantation mansion with enough explosives to bring down the World Trade Center. He stands smiling with his hands on his hips, puffing his cigar as the whole thing blows sky high, while behind him on horseback, slightly disheveled and sexy as all hell, the woman he has spent the entire movie slaughtering lives in order to save smiles demurely and shakes her head as if to say, “Oh, that Django…”

The good guy gets the girl.