turning up the volume 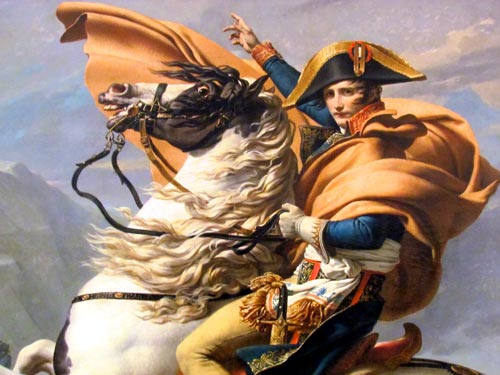 Turning Up the Volume

Their world was coming to an end and he offered them an alternative, he offered them chestnuts roasting on an open fire and they said been there done that to which he replied no you haven’t and they said yes we have and he said that wasn’t you that was your great grandfather or maybe your great-great grandfather, I don’t know, how old are you anyway? And they said none of your fucking business which he thought was rather rude for people whose world was coming to an end and they said you reap what you sow dude, it’s in the blood, a life-line of fuck-ups, and there they were using foul language again which wasn’t doing anything to save their bacon, that’s for sure.

It was going to take more than chestnuts he was beginning to see, it was going to take action, so he dressed up like Napoleon and waved a saber in the air, he wished he’d had a horse but he didn’t so he waved the saber and called out things that he hoped sounded French and then he said, “Follow me!” in English.

No one budged. And what would he have done if they had, budged that is, followed him, where would he lead them? To the promised land, a safe haven, a hidden valley, down the street to the train station?

He could try talking trains, but probably they’d just burst out in profanity again, and what were those plugs they had in their ears with wires snaking down into their shirt pockets, what was in there, explosives? Were they planning to blow themselves up, had they been drinking lemonade laced with cyanide?

Anyway the train idea had drawbacks, they might focus on boxcars and have a flashback to Auschwitz and think here we go again, but it had nothing to do with Jews and Nazis, he knew what the real problem was, it was the nature of the Beast. But things had gone past that, that’s why their world was coming to an end, things had escalated and the whole thing was going to blow sky high any minute now, and that would be that.

He took off the Napoleon outfit and laid his saber down and half hoped it would turn into a plowshare but it didn’t so he got six tennis balls in the air at the same time and started juggling. That caught their attention for awhile, they were attracted to things that seemed impossible, and if he could levitate, even a foot or two and hold it, well maybe that would do the trick and they’d listen.

But no, they’d seen that one before, or heard about it so many times they could puke, Christ on a cloud heading skyward. Nothing they’d been spoon-fed from the time they were born ever worked in the real world, and they just didn’t give a fuck.

All they wanted was coming out of their pockets thru those wires and getting drilled straight into their heads thru their ears, and they turned up the volume.

Tagged as John Bennett, Poetry, turning up the volume