the far side of the infinitesimal 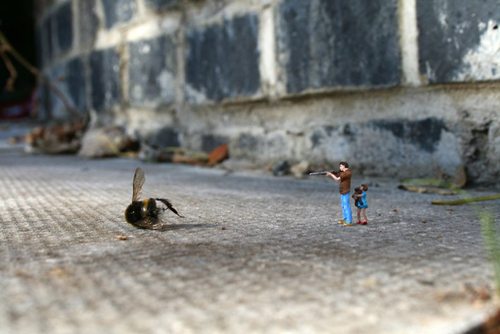 The Far Side of the Infinitesimal

People thought he was a kook, but he was on to things. Like the world on the far side of the infinitesimal.

You think you know small? You probably think an atom is small, or maybe you’re some hotshot scientist and you’re thinking, “Yeah? How about a quark?”

Well wipe that smile off your face, buddy, a quark is as big as an elephant in the world on the far side of the infinitesimal

But the thing is, even tho it has no idea that we exist, this world goes about its business much the same as we do. There are creatures there, impossible for us to imagine they’re so tiny, and there are tall buildings, relatively speaking, and crime, although crime is a concept and concepts are too huge to exist in such a tiny world. What there are then are disruptions in harmony, which when you stop to think about it is what crime boils down to.

He was unhappy being so huge that the tiny creatures on the far side of the infinitesimal had no idea he existed. It sounds odd, but he identified with them. He felt he understood how their minds worked, and sometimes he’d have dreams where he tumbled thru the barrier that separated them from him and they’d welcome him with cries of joy.

He’d wake with a start from these dreams, drenched in sweat and muttering strange sounds that belonged to their language, which, little by little, he was beginning to understand.

Tagged as John Bennett, Poetry, shards, the far side of the infinitesimal