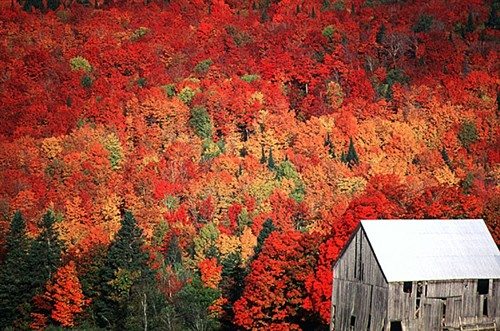 Fall came, but the leaves didn’t change color or fall from the trees, and soon out-of-work yard boys and gardeners began turning to crime. The gun lobby stepped in and donated high-voltage stun guns to every police department in the country to keep the yard boys in check, and in less than a month 5,000 horticulturists in New England alone were killed by stun guns used in the enforcement of the new Leaf Laws that were passed in an emergency session of Congress to deal with what was being called the Leaf Uprising.

Other measures were taken to strengthen the economy, weakened by the leaves not falling. Food stamps, Medicare and unemployment were abolished, and the unemployed were drafted into a government work force that went up and down the tree-lined streets of wealthy neighborhoods across the country, working out of trucks with boom lifts, painting leaves red, yellow and gold; they were housed in tents in compounds on the edge of town and fed gruel and vitamin pills. They were not allowed to smoke or leave the compound when not painting leaves.

No one saw this business with the leaves coming, and everyone had his own take on what brought it on. The Christian Right claimed it was an act of God to punish people using birth control, the Tea Party said it was the latest in Muslim terrorism, and there was almost unanimous agreement that it had nothing to do with the myth of global warming. Within a month 80% of all Facebook entries referred in some way to the leaves not changing, and Hollywood stepped in and began pumping out apocalyptic movies about tree demons.

Sensing that they had to act swiftly before things got worse, Congress voted to give Monsanto a three billion dollar government grant to research a way to genetically engineer leaves so they would change colors in the fall and turn green again in spring, and they gave another billion to Dupont to come up with a chemical that could be sprayed on the trees to make the leaves fall to the ground.

The Pope of Rome, who had already caused an uproar by saying that gays were children of God, asked all good Catholics, when Christmas rolled around, to engage in a world-wide 24-hour vigil and pray to God to heal the trees, which prompted bookmakers in Vegas to give three to one odds that he would be assassinated before the first day of winter.

Donald Trump stepped forward and said the whole thing with the leaves was a lie, that what had happened is the world had gone color blind, and the real danger had nothing to do with leaves, the real danger was that now it was impossible to recognize illegal immigrants just by looking at them, and the American Way of Life was in danger.

A gallop poll showed that 86% of the American public agreed with him.