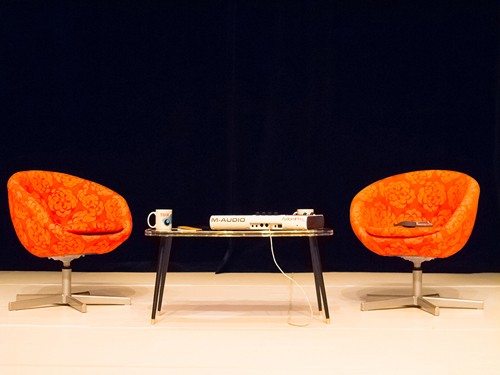 The longing is short-lived. The delirium is endemic. The cure is snake oil, but do you think it sells over the counter? Not since the covered wagon. Not since the buffalo rifle and the long bow. Not since the invention of ink.

How to decipher the handwriting on the wall in a digital afterlife? Is there a pharmaceutical escape hatch? Will prayer make things right again and take the guns away from the bad guys? Who are the bad guys? Will someone work up a profile or is that asking too much? Who’s doing the asking and who are they asking? Right there we run smack into a brick wall.

Six university adjunct professors were invited to debate these questions on a talk show called Lay It Out There. Behind them were the card men–a laugh card, a cry card, an applause card and a boo-hiss card. They weren’t cards, actually, they were more the size of posters, and they weren’t for the studio audience; studio audiences had long since been replaced with virtual audiences. The cards were held up in front of the TV cameras and were meant for the home audience, the millions of flesh-and-blood viewers across the country.

At first the cards were used just for talk shows, but as time went on they took root in sitcoms, news broadcasts and movie reruns. Things went along smoothly for quite some time, and then, out of the blue, in the year 2056, a protest movement flared up calling itself the Free Your Mind Brigade, taking Homeland Security by surprise. Congressmen were involved, and well-known entertainers. They had some clout, and they succeeded in having the cards abolished.

But it was a short-lived victory. People lost all sense of direction and purpose once the cards were gone, and the country plunged into chaos. Homicides, suicides and drug overdoses skyrocketed, and six banks failed. A battalion of Marines impetuously invaded a small NATO country without Pentagon approval, almost sparking global warfare, and a top general stepped down.

The government took action. It declared martial law and seized control of the media. The cards were reinstated, and within days everything was back to normal.

Over a hundred individuals were identified as affiliates of the Free Your Mind Brigade. They were arrested and summarily executed on national TV. It was the first time executions were shown on live TV. The reinstated cards were used, and each time the ax fell, boo-hiss echoed throughout the land.