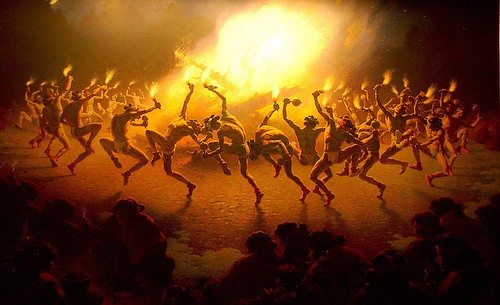 Maybe it’s not your cup of tea. Maybe it’s my cup of tea. Trade routes to China, oysters on the half shell, the impossible dream.

All this would make sense on a Pacific coral island, shipwrecked and weaving jockstraps out of seaweed. It’s a way to pass time and all you’ll be wearing when they come to rescue you, those sailors with the devilish eyes.

Offer them a cup of tea when they step out of their landing boat. And keep your mouth shut about the cave in the mountains full of treasure and the chief’s daughter who sleeps with you in your hammock when the moon is full. What they don’t know won’t hurt you.

They’ll make small talk and then offer you shiny trinkets and a gig in a traveling freak show once you’re home again. Marvel at the trinkets, hop around on all fours and grunt like a pig, live up to their expectations of what time has done to you. Make your X on the contract for the freak show that they roll out like a scroll (six years in a tiger cage biting heads off of chickens in return for all the rum you can drink), but not before they unload the first ten casks as a good will gesture from the mother ship. Then give the signal and step back while the chief and his sharpshooters take them out with poison darts, these blue-eyed sailors on an ill-fated rescue mission. They topple into the outgoing tide and float off.

That night around a bonfire the natives whoop dance and holler and guzzle rum. Sparks fly everywhere. They’ll never drink tea again. They’re full-fledged alcoholics now, and when the sun comes up they hop in their canoes and go island hopping, looking for the next drink. They leave you behind with the chief’s daughter who over the years bears you six children.

Life seldom turns out like we planned it to. One little shipwreck and it all sinks to the bottom.