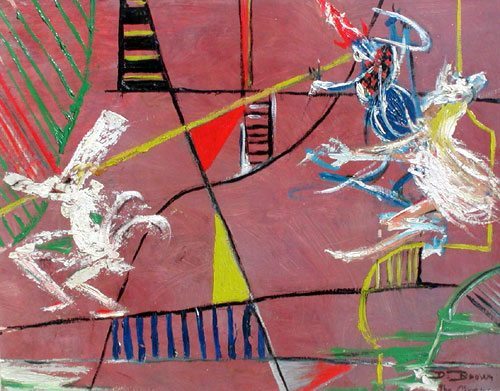 He blew smoke rings up his own asshole. He could do it, he was a contortionist, and not only that but also a failed politician. He’d spent years blowing kisses to babies, which gave him the lips for blowing smoke rings. And of course he’d kissed a lot of ass, too, so the territory wasn’t new to him. But his reason for doing it was boredom, he was bored out of his mind, and you have to be out of your mind to blow smoke rings up your own asshole, especially if you do it in public, which, eventually, he began doing. It landed him in one of the last traveling circuses, touring the south and mid-west. Winding up in a circus is inevitable for a double-jointed failed politician.

In the circus it was discovered that he had uncanny balance, and it wasn’t long before he was doing his act on the high wire. He’d bend over backwards and grab his ankles, shape himself into a wheel, and stark naked he’d roll on out there, a cigarette stuck between his lips. He’d blow smoke rings and suck them up his asshole when it came around while a dwarf on the far platform did a slow drum roll. The audience ate it up, the management gave him his private trailer, and the Fat Lady took a shine to him.

After awhile he grew a bushy red mustache that he waxed and curled at the ends into points, and for his finale he blew two smoke rings that drifted down over these points and shimmered there. He continued coming up with ingenious things to do with smoke rings, and gradually he phased out the business of blowing smoke up his ass. This allowed him to perform fully dressed, and the Fat Lady, who had been a seamstress before running off with the circus, sewed him magnificent costumes of leather and brightly colored silk, festooned with sequins.

He went virile on the Internet, got on all the talk shows, and did a command performance at the White House where he and the President stood side-by-side blowing smoke rings.

But eventually the novelty wore off, and the world moved on without him. He settled back into circus life and married the Fat Lady.

They had three children, one of whom went off to college to study law.