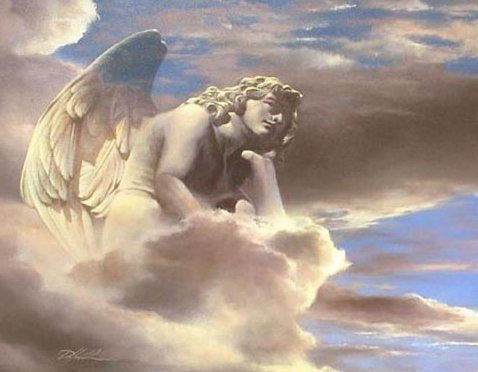 Forget the angels up in the sky. They’re not up there. They’re submerged in rice pudding. This is okay by the happy monks in Tibet but doesn’t set well with the heaven & hell crowd–angels up in heaven, devils down below, end of story. Still, they can’t get the image out of their heads, and it’s the first concrete image of angels they’ve ever had. Up until now what they saw were downy white-feathered wings attached to nothing. Now they see haunted faces submerged in rice pudding, looking up at them, their wings nothing more than tiny stubs protruding from their shoulders.

This knocks a hole in a lot of things, like the angel Gabriel swooping down from heaven in a great gust of wings to fill the Virgin Mary in on her immaculate conception, and guardian angels enfolding frightened children in their majestic wing span. And the thought of a host of angels singing hosanna in the highest from the bottom of a bowl of rice pudding is enough to put a stupid grin on your face.

And what about the demons of hell? Are they too a laughing stock, inept at the simplest form of torture? Do souls damned to hell hold their sides and roll around on hot coals laughing gleefully at these sorry-ass demons? Why doesn’t Lucifer whip his demons into shape, or could this be his way of getting back at God?

The image of God sunk in rice pudding fills the heads of the faithful, and their faith that was their armor falls away like a snake shedding its skin, leaving them slithering naked thru the green grass of Eden.