barbarella in the old folks home 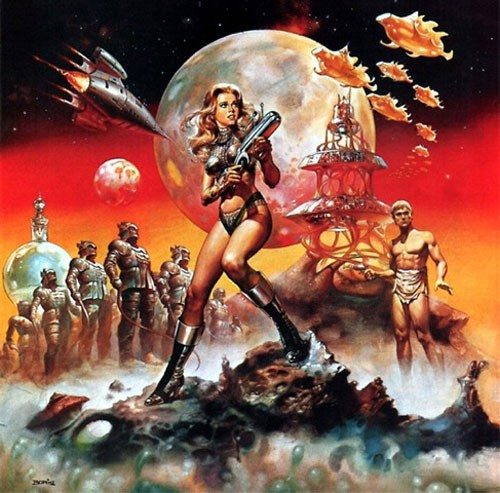 Barbarella in the Old Folks Home

I recently streamed a French movie on Netflix just because it had Jane Fonda in it and I wanted to hear her speak French.

They all go way back, and way back the lone-wolf senior citizen was getting it on with both the wives – and now it comes out. Which takes the two women by surprise, because neither of them knew about the other, and the husband who doesn’t have Alzheimer’s goes after the lone wolf with a knife at a barbecue they’re having next to an outdoor pool. But twice around the pool and they’re both exhausted and have to sit down. Sullen, all five of them sit there in lawn chairs, sipping wine.

That night the husband with Alzheimer’s makes an entry in his diary: Claude was fucking our wives. He keeps a diary as a substitute for his vanishing memory, and every time he reads the page about Claude fucking his wife it’s a revelation, and he’s startled all over again. Until one day, in a stroke of brilliance, he rips the page out of the diary, crumples it, and tosses it in the trash. Brilliant!

Finally the husband with Alzheimer’s gets so bad that his wife (Jane Fonda) can no longer take care of him. She puts him in a home.

Then, realizing that the tie that binds them together is beginning to unravel, the four friends put their heads together and go into action. They spring the memory-challenged husband out of the home, pool their resources, and move in together.

It looks like a happy ending until, abruptly, Jane Fonda dies. A little secret she’d been keeping is that she had cancer.

They give her the upbeat funeral she wanted, but afterward her Alzheimer’s husband begins wandering around calling for her. They don’t try to stop him. Instead they join him, and the movie ends with the four of them strung out across a field of grass, looking up at the sky and calling her name.

I heard Jane Fonda speak French, but I also got a lesson in how to handle my last days, which are coming up fast, with style.