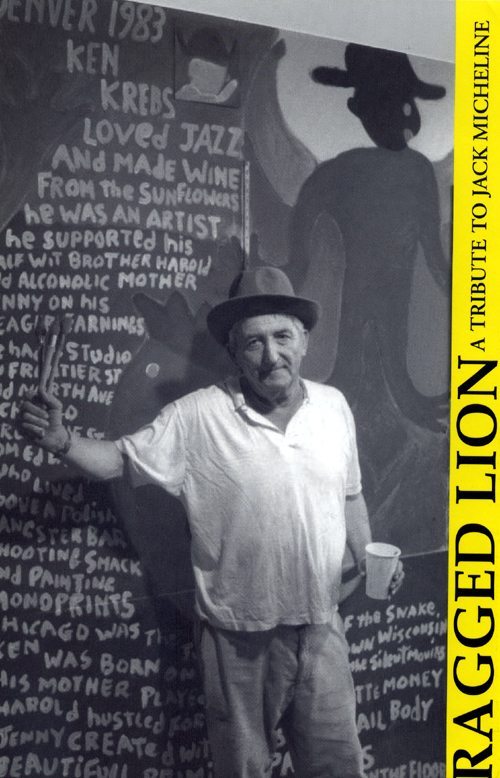 THANKS TO Mike Schapiro for suggesting the tide of this book. A very special thanks to Vince Silvaer, Jack Micheline’s son and founder of the Jack Micheline Foundation for the Arts, and to Matt Gonzalez, publisher of Micheline’s last book, Sixty-seven Poems for Downtrodden Saints; Ragged Lion would be a shadow of itself if it hadn’t been for their generous sharing of information and material. Thanks, too, to Len Fulton of Small Press Review for furnishing mailing lists; to A.D. Winans, who chipped in beyond the call of duty; and to Wayne Miller for his “Wild Bunch” photo collages.

CREDITS: A number of poems and prose pieces in Ragged Lion were written for and/or read at one of two memorials for Jack Micheline in March of 1998 — one in New York City, the other in San Francisco. In addition, some pieces saw previous publication in: Beat Scene; Big Scream; Bloomsbury Review; The Burial of Longing Beneath the Blue Neon Moon; Chiron Review; Jawbone; Next; The Vagabond Anthology. There are a number of photographers whose work appears in these pages; they have been credited in captions accompanying their photographs. The captionless photograph on page three of Micheline playing harmonica was taken by Jim Lang. 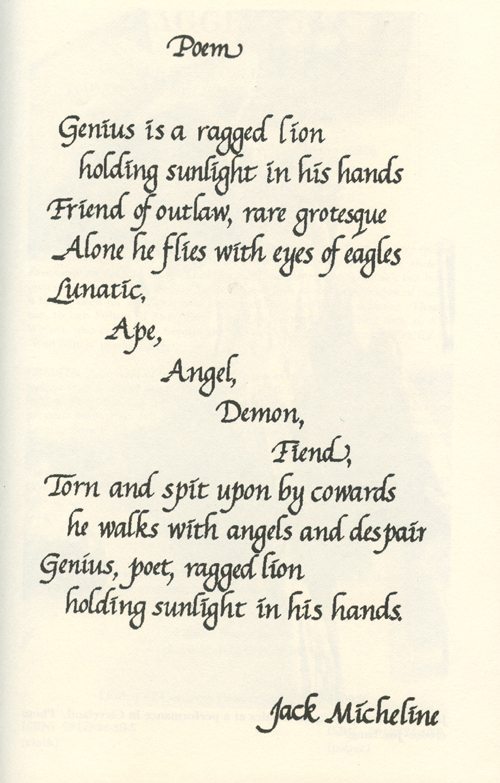 ANOTHER ONE BITES THE DUST

(a few words on how Ragged Lion came about)

On February 27, 1998, Jack Micheline, America’s quintessential street poet, died on a BART train in the San Francisco Bay Area. I got the word from Al Masarik before the obits hit the papers. “Another one bites the dust,” said Al.

A few days went by with Jack knocking around in my head, and then one morning I rolled a sheet of paper into the carriage of my old manual typewriter and wrote the following:

Someone to speak to. Someone to call my name. Someone to whisper sweet nothings down Ihe dark corridors of time. Someone to rock me in generic arms and coo I’m blameless. A splatter of paint. Graffiti. Antimatter. Kenneth Patchen grey matter, like San Francisco fog. Bob Kaufman, gurgling blood and silence in a North Beach alley. Jim Gustafason wrapping dead Indians in surplus army blankets. One little, two little—there goes my baby with someone new. He sure looks happy. Once in a blue moon, the good guy gets the girl.

The tie that binds. Railroad ties in a heat-shimmering Methedrine Mexican afternoon. Countdown. One little, two little—no one really knows what made Neal tick.

We’ve all been made. Disfigured by the Man. Fast-changed by death. Kerouac with his head in a toilet, puking dreams. Burroughs with his cats and hand guns in a Kansas City cul-de-sac. Little Alien, strangely innocent in spite of his naughty tricks. The legions, the invisible army, rocking off to battle on the Midnight Express. Storm troopers of a beat generation. One little, two little…

So what the fuck, Jack. A pretty classy way to cash it in. Rocking along on the train, the rhythmic clacking of iron wheels on iron tracks. The California that you loved so well, rolling by outside the window, your own sun-radiant reflection, ghost-like in the glass, floating over the passing landscape. And then the first stab of pain knifes you between the ribs. You grimace. Your own eyes smiling back at you from the tumbling dream of California, the last thing you register.

That should have been it. I should have typed up clean copy of what I’d written, stuck a title on it, and sent it off to some obscure little magazine. But I didn’t. Instead I decided to publish a tribute. Don’t ask me why. I’d only met Jack Micheline twice in my life, the first time in 1976 at a book fair at Fort Mason in San Francisco where I had a booth.

We arrived simultaneously at the same check-out stand in a nearby grocery store, Jack with a gallon of red wine, me with a half rack of beer. We glared at each other, wondering who was going to step up to the register first, until the glares turned into grins and we began to laugh. We went into the “you first…no, no, you first” routine, and then we were out of there and walking back to the book fair on opposite sides of the street.

The second time was at Vesuvio’s in North Beach. I had moved to Washington state by this time, and I was back in the Bay Area on a visit. Grant Bunch and I were seated at the bar, leaning into each other, and sparks were flying—we’d been drinking non-stop for three days. We were insane, we had always been insane. We dreamed up Vagabond together over a pitcher of beer in a place called Brownley’s in Washington, D.C. a decade earlier, and we’d been drinking from D.C. to Munich to New Orleans to San Francisco ever since. We were like two black holes engaged in a tug-of-war, Grant and I, and the plan that was shaping up in my head was to get into my big Chevy 360 and fast-lane it back to Washington that very night—which I did. Micheline was holding forth at a crowded nearby table, reciting poems, gesticulating, loud. And then, as if by magic, he had his arm draped over my shoulder and was up close, looking me straight in the eye. “Don’t do anything stupid,” he said, and was gone again.

There aren’t many people who pay that much attention to what goes on around them, especially in a crowded bar where they’re holding forth, and maybe that’s what put the idea in my head for a Jack Micheline tribute—the significance of those two encounters.

I got in touch with Harry Smith of The Smith Publishers in Brooklyn, and we joined forces, making Ragged Lion a Vagabond/Smith Publication. We started by contacting a handful of poets from the old days, hard-core veterans of the small-press wars, part of what Hugh Fox, taking his cue from Charles Plymell, has been calling The Invisible Generation. Most of them responded, some with suggestions of other people to contact, people who had known Jack personally, people, largely (but by no means exclusively) associated with the Beats.

The enormity of who Jack Micheline had been came crashing down over the simplicity of my original intentions. Material began pouring in, poems, paeans and recollections of outrageous behavior, and I soon realized I was in over my head. Jack in Israel, tilling the soil. Jack in Holland, where they treated him like some sort of hero. Jack in Spain, borrowing money from William Saroyan. Jack in Chicago with the one-armed Eddie Balchowsky. Jack in Mexico, painting with Rick Librizzi, bankrolled by Franz Kline. Kerouac writing an intro to Jack’s first book of poems, and James Baldwin introducing him to the editor of Dial Press; Jack walking away from it all. Jack getting married with an inebriated James T. Farrell as best man. Jack on the Conan O’Brien Show with his sax man Bob Feldman. Jack receiving the “Revolt in Literature Award” from Nat Hentoff, Charles Mingus and Jean Shepard. Jack presented “The Most Valuable Performance Award” by Ken Kesey at the Naropa Institute’s 1982 Jack Kerouac celebration. Jack dancing around a table and drinking magic water with Charlie Mingus and an old man he met on the street. Jack wearing for one long New York winter a woman’s coat with fur collar—it was a freebee and beat freezing to death. Jack strolling with Frank Lloyd Wright on the grounds of Taliesin in Wisconsin. Visiting Charles Olson. Bringing a prostitute to Bukowski as a present, Bukowski locking himself in the bathroom and not coming out until they left. Jack at the track, betting his last dollar. Jack at the Aquaduct Racetrack in Queens, pulling down a $5,600 trifecta. Jack not bothering to take the plastic wrapper off a motel-roorn glass before drinking from it. Jack with over 100 suitcases of hodgepodge and treasure stored here, there and everywhere. Jack writing, always writing, and painting, painting, painting—on this, that or anything. Living in skidrow rooms. Crashing on people’s couches and floors. Reading in North Beach and New York, in Denver, Los Angeles and New Orleans and points in between, his voice thunder, holding audiences in the palm of his hand. Jack with Janice Blue, Bob Kaufman, Gene Ruggles, Kell Robertson, Wayne Miller and the downtrodden multitudes. Jack near the end in his painted room in the back of Abandoned Planet, Scott Harrison’s Mission District bookstore, chain-smoking, impatient and game; death had come courting, showing some leg, fluttering her lashes. “Let’s do it,” Death said. “Hold your horses!” said Jack. “I’m not done dancing…”

Jack Micheline was more than a poet, a bard and a wandering minstrel. He was more than an artist and con man. He was Walt Whitman’s wild child who—after forty years of defiantly dancing on the cutting edge of life—had not been broken, even though he had been rendered toothless, ragged, diabetic and frayed by a society that goes hard on those who don’t kneel to reason, bow to the pragmatic, and prostrate themselves before authority.

It’s a bawdy, disparate, sometimes contentious and by no means all-inclusive crew marooned in the pages of Ragged Lion. There are numerous people not represented here who by all rights should be; they’re missing not out of malice but due to the constraints of time, limited resources, and various other vagaries of life; they’re here, nevertheless, I would hope, in spirit.

Ragged Lion is a celebration of Jack Micheline’s existence, which (from all indications) is still going strong, somewhere out there beyond our wildest dreams. — John Bennett Ellensburg, Washington January 25, 1999 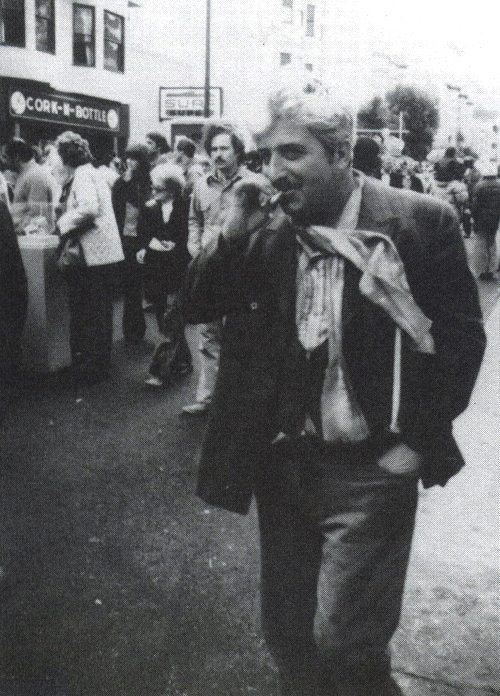 Jack Micheline spoke to the poet in everyone in an age when business is usual and poetry a sideshow. He was authentic street and so we are witness to the voice of one undefeated. — Jack Hirschman

Despite cliches and sentimental platitudes Jack Micheline’s poetry is at times deeply moving. Like the great singer/performer Edith Piaf he was self-taught and an inspired naif. Both were street people and both had the rare gift of mesmerizing and moving an audience. Jack was totally enthralling on video or before a live audience. He was touched with genius. — Harold Norse

Jack Micheline: gregarious, boisterous, unstoppable, his energy, edgy optimism and righteous anger gave him a high-octane approach to life. Over the years, he endured, scrambled in the margins, grumbled against the suits who ran everything but couldn’t touch the freedom to write and paint his heartful, tender ire and optimistic resilience. Like one of those club fighters up against the ropes, Jack always rallied to win another fight. — David Meltzer

From the introduction to Ragged Lion:

Jack Micheline was more than a poet and an artist. He was Walt Whitman’s wild child who—after forty years of defiantly dancing on the cutting edge of life—had not been broken, even though he had been rendered toothless, ragged, diabetic and frayed by a society that goes hard on those who don’t kneel to reason, bow to the pragmatic, and prostrate themselves before authority.

Ragged Lion is a celebration of Micheline’s existence, which— from all indications—is still going strong, somewhere out there beyond our wildest dreams. — John Bennett 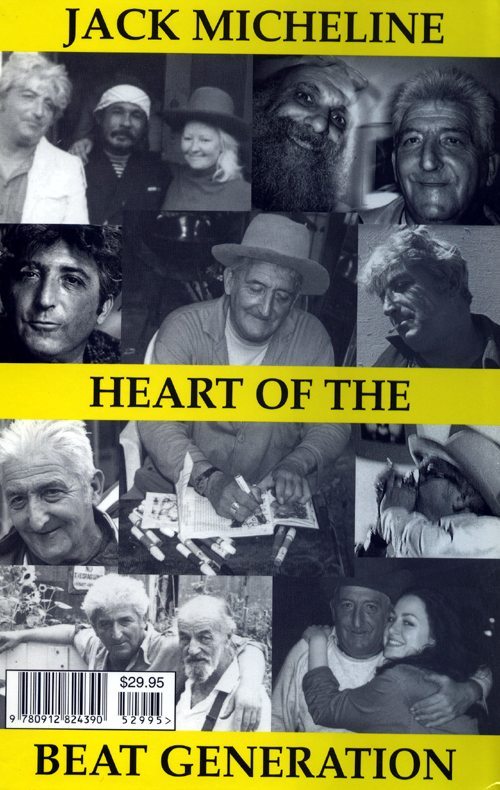