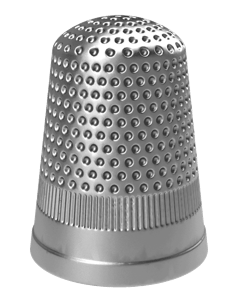 One day you hid in your mother’s sewing kit under the thimble, but after a day or two she found you.

She lifted you out and up to eye level, her only child who years earlier tumbled out of her womb into the sheets as she slept, no bigger than a pea. When she awoke the next morning she held you in the palm of her hand and stared at you. Then she brought you up to her breast, and you wrapped your arms around that dark nipple, your first taste of postpartum sustenance.

She lived alone in an isolated cottage on an ocean beach and sold exotic herbs from her garden in the village. She kept you a secret from everyone in a ventilated jewelry box that was also a music box. You slept among sapphires and pearls, and when she opened the box in the morning, sweet music filled the air. She always hoped you’d grow bigger, but you never did.

Eventually, out of loneliness, she began talking to you. She lay on her side on her bed with you beside her on the pillow, her eyes gigantic blue orbs, her lips moving and moist, her teeth flashing, her tongue flicking in and out. Her words were gusts of wind that ruffled your hair and mixed with the sound of the ocean.

Then one day, when you were twelve, she frowned, a new and frightening expression.

“What’s that, young man?” she said. You were stretched out on her lap in the recliner, happily listening to her reminisce.

She picked up the magnifying glass from the coffee table and held it over you, and with the tip of her finger she grazes the tiny thing between your legs that had grown mysteriously hard.

The very next day she went out and bought the sewing kit, and using the magnifying glass and the thimble, sewed a pair of pants cut from a maroon linen napkin. They fit perfectly.

After that she began sewing clothes for normal-sized people and selling them in the market, and one day a tailor from the next village happened by and said, “Madam, you have a gift.”

She moved in with the tailor. She brought you along but still kept you a secret. You were easy to hide.

Over the years she fed you and made you new clothes, but she was gone most of the time now, and she stopped telling you stories. And then one day you escaped from the music box and made the perilous journey to her sewing kit that since getting a sewing machine she no longer used but kept under the bed where she and the tailor slept. You climbed in and pulled the thimble over you.

She wasn’t angry when she found you. You were just a piece in her life that had got somewhere where it shouldn’t be. She put you back in the music box.

“I love you,” you said as she closed the lid, the first words you’d ever spoken, but your voice was too tiny for her to hear.