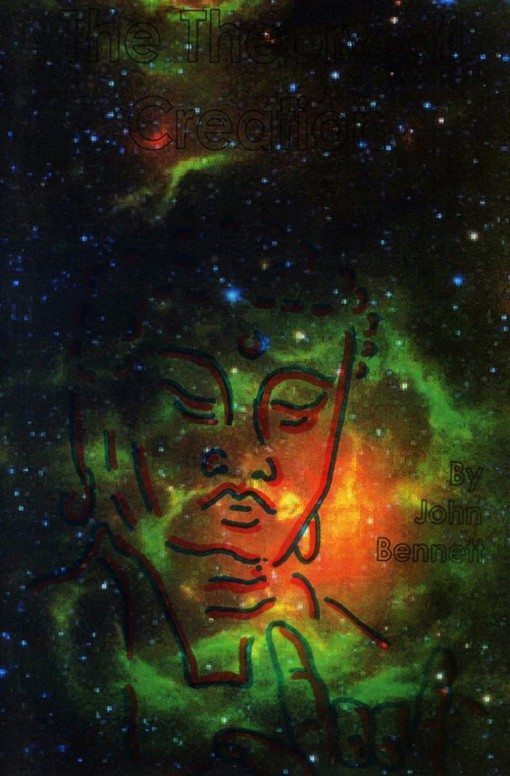 The writing below was written in the late 1990s. It’s from the 2005 book, The Theory of Creation. If you’d like to learn more about the book, or if you’d like to order it, go here…

Thanksgiving. Driving thru Oregon’s Blue Mountains with my renegade grandchildren when a voice comes on the radio telling us the air-raid test is over. It’s NPR’s Tokyo Ross, Miss Modulation, no burrs in her voice, no barbs, a honeysuckle voice that smooths the wrinkles out of awareness, rocks you to sleep on the icy curves at 5,000 feet. “At this point in time,” says Rose, returning to the topic she’d been talking about, “1984 has been rendered a joke.”

“Why’s that?” my astute and suspicious granddaughter wants to know. “What’s so funny about 1984?”

It’s 1999, the clock didn’t start ticking for her until 1989, everything that came before she has to take someone else’s word for.

What can I say? Should I try to explain Orwell’s book? Should I suggest she read 1984? She’s living 1984. Her mother is Big Sister, smudging out identities with her dysfunctional thumb. What my granddaughter has to do is experience life as it comes rolling over her. What she has to do is accumulate and assimilate experience with her eyes wide open so that she already knows in her bones what Orwell is talking about, when and if she ever reads him. And if she never does? Will the trees turn to stone? Will the sun fall from the sky? Will she wake up one morning with snakes in her hair?

In a sense Rose has it right. Something much worse has transpired than what Orwell foresaw — the blurring of distinction, the sociopathic neutralization of good and evil. The Proles are not out there in a fabricated war zone humming sea shanties wile hanging clothes on a clothesline. The Proles are in Shangri-La driving fancy cars with ski racks and air bags and “No Fear” bumper stickers. The Proles are knee-jerk consumers with maxed-out credit cards. The Proles have quit smoking. The Proles live in an ant farm and think its the Alps until they fall down the rabbit hole. Alice in Wonderland is closer to what’s going on today than 1984.

“It’s a book, not a year,” I tell my granddaughter. “A book written a long time ago that predicts the future.

“And it turned out different?” she says.

“And that lady is making fun of the book?”

“So it did happen, what she’s saying didn’t?”

“I don’t like the way she talks,” says my granddaughter, and yawns a high-altitude yawn.

About then my fifteen-year-old grandson in the back seat starts moaning to the music coming thru his earphones. I look in the rearview mirror and see that he has his eyes closed and is shaking his head.

“God, James,” my granddaughter says, turning in her seat to look back at her brother. “Stop moaning!” And then, pointing thru the windshield, “Look!”

Overhead a hawk is gliding on the wind against a clear sky. I switch off NPR and silence swoops down over us. James slides his earphones down around his neck and leans over the front seat to look at the hawk, and for an instant, in the silence, we all three know exactly where it is that we came from.