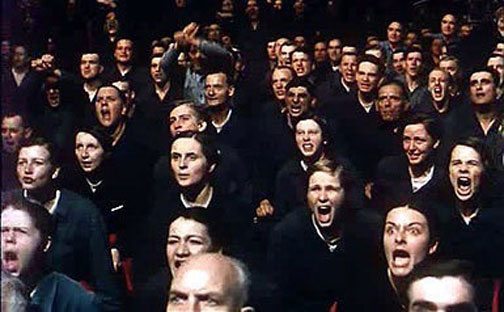 There were more black lynchings after the Civil War than before. There was more cohesion in the Middle East under the Ottoman Empire than when France and England carved it up into a handful of countries with contrived borders after World War I, and definitely more cohesion than when the U.S. marched in and carved things up even further after 9-11, a move that launched millions of Arabs into migratory homelessness.

There is an available history behind all this that most people know nothing about, even many who fancy themselves well-educated, a bogus history which is 99% media hype and political propaganda with no connection to the day-in, day-out lives of the people involved; and there is a “deeper” history that may look truer on the surface but also has no connection to everyday life.

The ultimate global task of those in power, be they government, media, stock market or industry (and they’re all cut from the same cloth) is to keep “the people” functioning under the illusion that those in power determine how their lives play out; it is irrelevant whether the people are satisfied with, indifferent to, or in rebellion against the Power in its multiple manifestations, what is crucial is that the people believe, without being aware they believe, that the Power determines how their lives play out on the most intimate level.

But in fact there is an unrecognized but significant gap between the workings of the Power and the lives people live on a day-in, day-out basis, and all the propaganda, all the false education and misinformation at play in the world cannot breach this gap.

We don’t define or analyze how we actually live our lives, we just live them, and this is the one unspoken truth that keeps us human and untouchable.