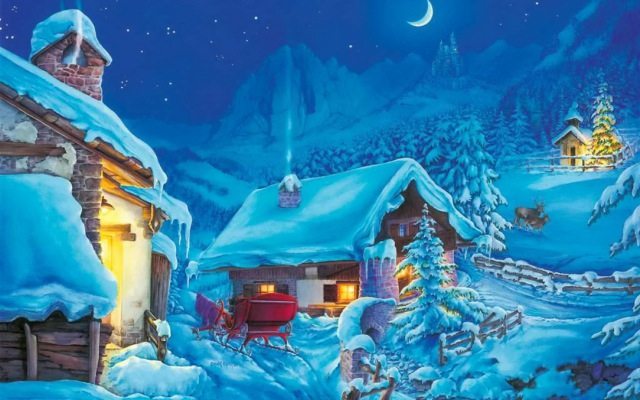 It’s fifteen below zero out with eight inches of snow on the ground. But on the narrow strip of ground against the house, under the eaves, there’s no snow but a spread of brown brittle leaves that didn’t get raked up last fall. I throw compost along that strip, for whatever wildlife happens by, and there is, by God, I kid you not, as I sit here sipping coffee, a robin hopping thru the leaves, beaking crusts of bread and frozen scraps of vegetable, pausing now and then to cock its head this way and that, as if it were summer and a cat might be lurking.

There are no cats out there, no cats and no dogs and definitely no other robins, and I run thru a series of conjectures on how this robin got here. Did it not leave when the other robins left, or did it fly south and then turn right around and fly north again, its bird-brain gyroscope thrown out of whack by global warming or solar flairs? Was it an egg that hatched too late in the season and the fledgling didn’t have the wings to migrate? Did a child have it caged as a pet and the child’s father, in a fit of cabin fever, threw a tantrum and said, “That’s it! I’m sick of that bird getting out and shitting all over the house and blapping off the windows! Out it goes!”?

Then, abruptly, as I was pondering these possibilities, the robin flew off to who knows where.

Things die out there when it’s this cold, animals and people. There are people in tents sleeping under bridges, people wrapped in newspaper at night over the library heat vent, people in other more fortunate people’s barns with hay pulled over them, people poorly dressed with holes in their shoes, their survival instincts as disrupted as the robin’s. I feel somehow that I’m to blame, at least partly to blame, and I am. Everyone tucked away in a warm house is somehow partly to blame.

I get up and start emptying my drawers of clothing, jamming things into Safeway paper bags. What do I need with five thermo undershirts, twenty pairs of socks, two pairs of winter boots and three sweaters? I take it all down to the Methodist Church where they hand out clothing to street people, and then I go to Safeway and buy twenty cans of tuna fish, ten loaves of bread and five can openers, and — feeling for some reason even more guilty — I run it all down to the food bank.

People are huddled against the wall, waiting for the door to open, and a fat man is sitting in a Cadillac with the engine running and the heater on, an impatient look on his face.

“He shows up once a week for free food,” one of the people along the wall says to me.

I bend down, scoop up some snow, pack a snowball and throw it against the Cadillac’s windshield. The man looks up, startled. And then all the people out in the cold waiting for the door to open begin packing snowballs. They come alive, there are smiles on their faces, and their eyes are on fire.