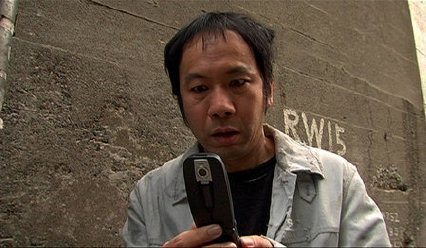 He wanted to tell people what he didn’t want to tell people. He tried explaining that to his son long distance, except nothing was long distance anymore, everything was in reach but unreachable. He tried explaining that too, even tho he was filling with dread and terrified of getting confined in a small space. A flash of alarm – who was trying to get thru to who?

He saw where that was leading, saw who was trying to put one over on whom. But wait! He hadn’t said that, only thought it, so what was going on? Wasn’t anything sacred anymore? The cow? The moon? The blue lagoon cram-packed with monsters?

His son was reading his mind and laughing like a hyena, loud and clear now, as if he was across the room in the shadow of the malfunctioning stand-up lamp. He needed to get the hell out of there.

“Are you on drugs?” he asked, and his son said, “Say what you called for, I don’t have all night.”

“Thirty years too late for that,” said his son.

“Listen, I want to tell people what I don’t want to tell them.” he said, no longer sure if he’d already said that or just thought it.

“How did you get my number?” said his son.

He dug deep, looking for that part of him that used to terrify people, and just like that he realized he was old and no one cared anymore what he said.

He looked down at the thing in his hand. It was tiny and black and he didn’t know where it came from. He stuck it in his jacket pocket and went out the door.

He began walking fast, his son’s muffled voice coming from his pocket. He thought that if he walked faster, maybe it would disappear.

Then he broke into a run.