doorway to the future 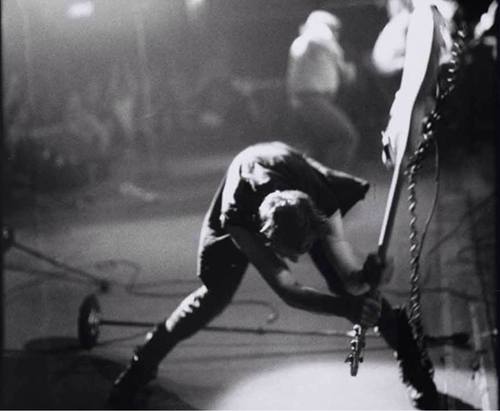 Doorway to the Future

He came knocking on my door late one night, I don’t know why, I hardly know him, but there he was, apologizing non-stop for disturbing me, and I said, “Jesus, enough already, come on in, take your coat off, sit down for Christ’s sake, you want some tea or something?”

“You still haven’t taken your coat off, take off your coat – you want a cigarette? Here, try one of these.” I handed him a hand-rolled.

We sat there smoking and he went on and on, he said life wasn’t worth living, there was no reason to go on, he didn’t even have his guitar anymore, he had to hock his guitar, and I jumped up and went in the other room and got my old Gibson acoustic.

He shook his head, the guitar hanging loose, dragging on the floor, and I yanked it away from him and smashed it against the TV, which put cracks in the body and snapped four strings on the neck, all but the low E and the D. Then I tossed it in his lap and said, “Do it! Whale on that mother!” He looked at me like I’d gone mad.

I stormed out of the room and came back with a case of blues harps and a 16-hole Suzuki chromatic, I yanked the guitar back again and ripped away on those two strings and ran my fingers up and down the frets and then I tossed it back in his lap. “Come on, man!” I said. “Rock the fuck out!”

Something snapped in him then, his eyes went wild, and he started in.

I pickup up one blues harp after another, damn near blew the reeds out of each one and then tossed it against the wall and picked up another while he ripped away on those two strings and began to howl like a dog and then I picked up the Suzuki and with my teeth ripped off the bottom reed-plate cover and played it like that, working the hell out of the button, and then the last two strings went twang and snapped and he bashed the guitar to smithereens against the edge of the table. I threw the Suzuki into the stand-up lamp and smashed the bulb. The two of us stood there in the dark laughing like hyenas until we didn’t have anything left in us.

He’s young and thinks he’s opened a doorway to the future.

Tagged as Doorway to the Future, John Bennett, Poetry, shards