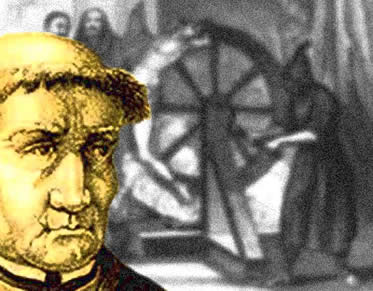 Having said all there was to say, the monk said a little more and accidentally resurrected Tomas de Torquemada, Grand Inquisitor of the Spanish Inquisition.

Pope Francis wrung his hands. It was one thing too many on an already full plate. He’d be called upon to do an exorcism, and he didn’t have it in him. He was already too busy defending gays as children of God and women as man’s equal, advocating the redistribution of wealth, knocking the Mafia and taking trips to Washington and the Left Bank. And many a good priest had perished trying to pull off an exorcism, men younger and in better health than Pope Francis. And Torquemada would be a tough nut to crack. Francis would need backup, help from people who in exchange would demand concessions in his agenda.

Who was this monk who spoke the unspeakable and resurrected the hoary specter of the Inquisition from its grave? What was his agenda? Did he even have one, or was his reviving the Inquisition an unintentional byproduct of his passion? If so, who better than the monk himself to conduct the exorcism?

Think modern, the College of Cardinals advised. Think military intervention. Ask Washington to send in a team of Navy Seals.

But before any action could be taken the whole thing got leaked to the media and Trump said there’d never been an Inquisition, it was fake news.

When things finally settled down the monk got expelled from his Order, the Pope’s popularity had plummeted, the resurrected Torquemada joined a terrorist cell, and the exorcism fell by the wayside.