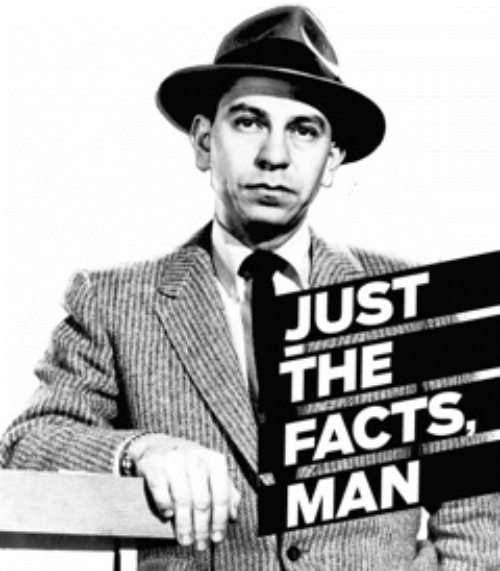 TV was still in its black-and-white infancy when Dragnet came on the scene, featuring friendly L.A. detectives Joe Friday and Ben Romero who always knocked before entering to ask the woman of the house a few questions concerning a robbery or a murder, sitting on the edge of the couch in their suits and ties, pens poised over their notebooks. And when the woman of the house began to meander into speculation, Joe would clear his throat and bring her back into focus with: “Just the facts, ma’am…”

Joe’s saying fax instead of facts wasn’t only a pun, it also played on his longing for a more sophisticated audience to communication with: a fax is a means of communication.

Eventually, in his off hours, Joe became a burglar, a second-story man, and here too a play on words was at work, a story being a form of communication. Joe broke into highrises and stole fax machines from offices. He became known in the press as the Fax Burglar.

Living in secret isolation in plain view of the entire nation eventually got to Joe, and he rented a warehouse down on the docks, furnishing it with a couch, a stand-up lamp, a hi-fi record player and a whisky bar. Then he rented a U-Haul and moved in all the fax machines he’d stolen.

He’d go to the warehouse late at night, turn on the lamp, mix a drink, put on some cool jazz, and start up the fax machines. Then he’d stretch out on the couch in the dim light of the lamp, his drink resting on his chest, close his eyes and pretend that all those chattering machines were hooked into phone lines, and that he was in touch with the world.