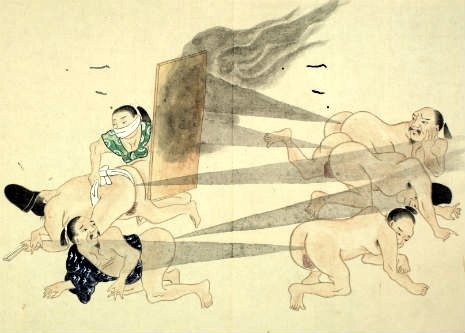 He always wanted to be a comedian, but on stage he became tongue tied, until one night performing at a stand-up comedy club he resorted to flatulence and in nothing flat had them rolling in the aisles.

Next thing he knew he was a guest on a late-night talk show. He tried to tell jokes, but they bombed, and so he did what got him there in the first place – he lifted one ass cheek and let go a whopper.

In no time flat he had his own prime-time TV show and people would turn on their sets to see what he’d do next. A favorite routine that he did repeatedly without having his ratings drop was breaking raw eggs over his head one after another while shooting dried green peas thru a pea shooter at a hamster hanging upside down by a string tied to its tail. Each time he hit the hamster there’d be a drum roll from the house band and a hot babe in about six square inches of bikini wearing impossibly high spiked heels undulated across the stage holding up a large card with a number on it indicating how many hits he’d made up to that point, and following close behind her was a Rocky look-alike in boxing shorts with gloves and everything, doing fancy foot work and shadow boxing.

He had to keep breaking eggs over his head until he’d hit the hamster fifty times, and after about twenty hits it got easier because the hamster stopped wiggling and just hung there. After each hit he’d cut a fart, and the audience would go wild.

Stop the average Joe or Jane under twenty-five on the street and throw out names like Lenny Bruce, George Carlin, Jonathan Winters and Robin Williams, and their faces remain blank. But ask them who Mister Flatulence is and they lite up, lift one leg, and cut loose a good one.