an act of contrition 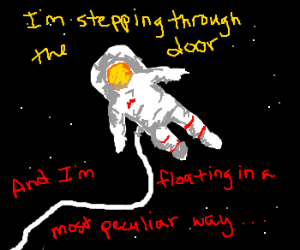 An Act of Contrition

(from the ongoing saga of Major Tom)

Do you know what it means to have someone destroy your ability to read and write at the age of seven?

It means God is not on your side.

It means the nun was light years ahead of her time. Three days alone in a closed room with Tokyo Rose and Rose never would have had the chance to set up a flower shop in Chicago after the war. The Second World War would have ended sooner and the war on terror would not have been necessary, if only the nun had directed her wrath elsewhere back when she was beating your brains out in the first grade.

So much time has gone by since then, but still there may come a knock on your door at 3 a.m. and you’ll be taken away to answer hard questions. Like, who was it taught you to read and write again after the nun was thru working you over?

“You and your sidekick Major Tom aren’t going anywhere,” you’d be told. “An act of contrition might win you some leniency, but not much, and not until you’ve given us a list of names.”

They hand you a pencil and a yellow pad, then stand back with their hands on their hips.

Tagged as An Act of Contrition from the ongoing saga of Major Tom, John Bennett, Poetry, shards