the back of the bus 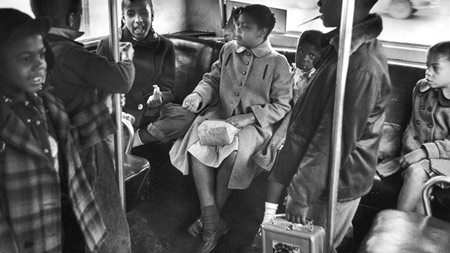 THE BACK OF THE BUS

Protest all you want. Say it’s not guilt. Say it’s pain, say it’s suffering brought on by suffering. Whip out those pictures in your wallet of napalmed babies in the Nam, raped women in the Sudan, a million starved cousins across the continent of Africa. All that shit. All that propaganda. All that un-American activity. The more you protest, the more worked up your fellow passengers become. Yours is the kind of behavior that leads to lynchings.

Pretty soon they’re out of their seats and beating on you. You’re down in the aisle and they’re kicking you in the groin and the face. The driver stops the bus and they throw you out the back door; drive off and leave you in the gutter. People walk by you like you’re not there. Then a cop ambles along and turns you face up with the toe of his boot. Calls in for a wagon. They cart you off. Two days later you’re wearing an orange jumpsuit and up before a judge. You’re in worse shape than ever. The inmates have been having their way with you, the real House un-American Activities Committee. The judge gives you 5 to 10. He tells you you’re lucky you got a trial at all. He tells you that un-American activity is terrorist activity, which is a sure-fire way to abdicate your God-given rights. They drag you back to your holding cell. Inmates jeer and give cat calls as you pass. None of this was necessary. All you had to do was sit in your assigned seat.

The Buddha had it wrong. Awareness is suffering, not life. Or, life is awareness. The rest is a zombie parade. Awareness is like a lightning rod. The sky is charged with lightning. It will strike you down the moment you reach out a hand to help someone. So don’t do it. Hold your cards close to your face and die in the shadows at the back of the bus, in your assigned seat.

Where is the Rosa Parks for this high-stakes game?

Tagged as John Bennett, Poetry, shards, THE BACK OF THE BUS