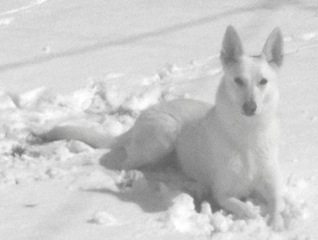 “I can’t get out of my own skin!” a German girl once said to me. That is, once she had been a German girl. When she said the business about the skin, she was middle-aged and a quarter of a century living in America. She said it in English, without much accent. She’d got out of her own country, her own language, but she was still in her own skin.

Snakes get out of their skin, but not their snakeness. That’s the skin the German girl was talking about.

My father just called on his new cellular phone, his very first one. From Medicine Bow National Forest, on highway 30, between Cheyenne and Laramie. Sitting in his big Lincoln with the windows closed. 82 years old, sitting in his Lincoln alone, talking with his wayward son a thousand miles away. He’s delighted like a small child. The thing actually works! He’s been packing it all the way from Louisiana, and he just now tried it out.

The whole family used to drive from Cheyenne to Medicine Bow for a day of picnicking and rock climbing on a small mountain of boulders dropped off by a glacier in a less complicated time. Intrepid boys in Ked sneakers easily made their way to the top. Medicine Bow, washed in memory.

My father is out of the Lincoln now, standing on that ancient soil, rocked by recollection. His young wife. His tawny boys. His youth.

Which brings us to the blind dog. Sundance. Buddha Dog. He has other names, too, if you’re interested. A shepherd, snow-white and majestic. My son picked him up at a county fair in Oregon. My son was on a roll, 18 years old and burning his bridges as fast as he crossed them. Sundance was a pup in a litter being given away by a back-to-the-land family. My son stuck Sundance in his pack and went off down the road. Within a month he was in jail, and Sundance came into my life.

Over the years I’ve made some heroic efforts to get out of my skin, until I finally surrendered. You have to surrender before you can fight the good fight. Everything before that is low blows and self-inflicted pain.

Ha! He just nosed open the door to this pantry where I write. Gave me that baleful, milky look. The blind dog himself. Blind, deaf, arthritic and incontinent. Hind quarters shot. But he still gets around. He still has that dignity, that majesty. He still, when the air is brisk and the moon is full, prances on our midnight walks. He may keep going straight when I turn, and he may not respond when I whistle, but what the hell, he’s prancing! Prancing in his own skin, right down to his last breath. There’s nothing more we can do. Nothing more that is required. Life is simple. Life is wonderful. Life is suffering. Life is inevitable, and it happens all at once.

Duality, fused in sunlight that is transformed into liquid color in the prism of my father’s tears as he stands before the boulder mountain of his well-spent youth.

Back in the Lincoln, the cell phone warbles a message he no longer needs to hear.