raising the bar on morality 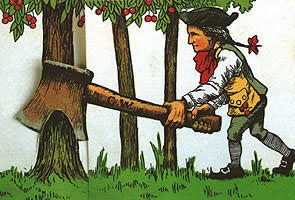 Raising the Bar on Morality

I used to chop down cherry trees to make false teeth for wax dummies in obscure wax museums throughout the south. I had clients from Memphis to New Orleans and got busted in St. Petersburg.

They had their own way of dealing with social deviants in St. Petersburg. They yanked my teeth and put in cherrywood dentures to give me a taste of my own medicine. Sixty days on the chain gang and then they set me free, glazed in wax with a red button stitched to the tip of my nose. “You’d best point that nose north, boy, and keep goin’ til you git there,” they told me.

I hit the blacktop and stuck out my thumb. Cars raced by and the wax melted into puddles. I ripped the red button from my nose and stuck it to a sign post with chewing gum. I walked back into St. Petersburg and took out three detectives and a patrol cop before the dogs treed me. It was 36 years, ten months, two weeks and four days before I hit the streets again.

When I walked thru the prison gate a free man in a gray suit with $20 in my pocket, there was a limo waiting. A tinted rear window came halfway down, and a well-dressed black man wearing sunglasses stared out at me. “Cherry Boy,” he said in a baritone voice. “Climb on in here out of the sun, son.” He called me son, in spite of the fact that I was 69 years old.

Yes, I’m the Cherrywood Killer, host of the popular Reality Show, Killers We Hate to Love. Once a week ten men dressed like George Washington, peruke and all, climb into a ring and begin swinging round-house punches until only one man has any teeth left. What he wins is the extraction of his remaining teeth and a fitting for cherrywood dentures made by me, the Cherrywood Killer. The other nine men are given jumbo tubes of whitening toothpaste as a joke. They wave the tubes over their heads like good sports and the audience goes wild. Some of the men even begin punching each other in the mouth.

It’s good money, having my own Reality Show, but the real satisfaction comes from my private practice in a high-rise in Atlanta. Celebrities, heads-of-state, CEOs from top corporations and cross-denomination clergy are my main clients.

The day is not too far off when everyone of consequence will have cherrywood dentures, raising the bar on morality and making it simple to tell the good guys from the bad.