a jellyfish as the key to awareness 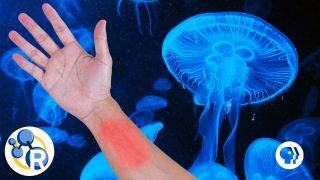 A JELLYFISH AS THE KEY TO AWARENESS

Think of the Void as a pan layered with corn kernels sitting on a cold stove burner. Don’t get hung up on where the kernels and pan came from, leave alone the burner on which the pan sits. Okay then, think of the pan and the kernels in it as the universe afloat with inert matter (the kernels) before the dawn of awareness. It’s hard, isn’t it, trying to think about how things were before awareness? Well, do your best.

Then the heat gets turned on. Try not to think about how that happened. Just try to visualize the kernels as they begin to dance around in the pan, then explode and fluff out. This is the point at which chemistry mutates into biology. Biology is the midwife of awareness.

The next thing you know, the planet earth is a globe of sloshing ocean filled with jellyfish, spinning around the sun. There’s one jellyfish that begins to sense something beyond the water it swims in, senses the sun, and it propels itself to the surface.

By this time the ocean is rimmed with sand, and the jellyfish gets washed up on a beach. It lies there, aware now of ocean and beach and the blazing sun. By the time the jellyfish grows appendages, the beaches are lined with jungle. The jellyfish hobbles into the jungle on its appendages and waits for other jellyfish to reach shore. When they do, it eats them.

One night the jellyfish sees its reflection in a moonlit pool of water. This is where self-awareness comes into play. It begins to look for another jellyfish to mate with. –the roots of over-population.

The next thing you know, the jellyfish is in a space capsule heading for Jupiter. It’s a long way from home, our jellyfish, drifting further and further from cosmic awareness, which is the heat that first started the kernels popping.

A little further on the jellyfish wilts like a rose in a vase on the mantel of nothingness, and things go back to where they started.

Tagged as A JELLYFISH AS THE KEY TO AWARENESS, John Bennett, Poetry, shards