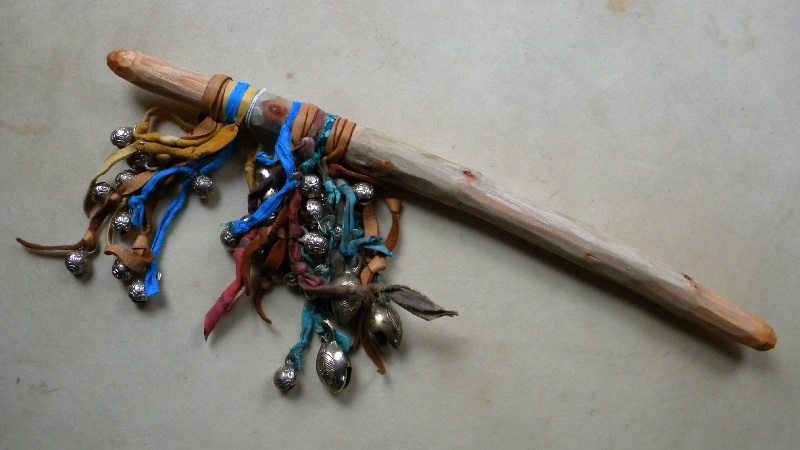 I had a talking stick that appeared in a recurring dream, and at the age of five it materialized at the foot of my bed. An ordinary stick, except it could talk.

“Pick me up,” it said, “and use me to draw a circle around you in the sand of your pain. Then make a line inside the circle. Now sit down in the circle with your legs crossed and close your eyes. This is how I’ll take you through life. There will be those who will enter the circle with war clubs, but no one will cross the line. Do you get my drift?”

Of course I didn’t. I was only five. But it was the first time I’d ever felt recognized, so I did it.

It was a long time before the stick spoke again. “Are you awake?” it said.

“Good,” said the stick. “Now open your eyes and step out of the circle. There are stones to turn over.”

I used the stick to turn over the stones, and out would spring coral snakes and scorpions. I’d twirl the coral snakes in the air with the stick until they grew dizzy, and then I’d lay them gently back down and say, “There now.” The scorpions were a different matter. They’d try to dart up my pants leg and I’d have to step on them. It never made me feel good, stepping on the scorpions, but the stick would sing lullabies as we lay under the stars at night, and that helped some. Nevertheless, my eyes grew sad.

And then came the dark holes. I noticed that people who railed against me for turning over stones, when they thought no one was watching, would stick their hands in dark holes. Their eyes would glaze over with pleasure, and they’d moan. After some time it was all I could think about. I wanted to do it too. I took to leaving the stick out of earshot when I slept, and then one day I did it.

There was something warm and fuzzy inside the hole. It sucked my fingers and sent sensual waves through my body. When I finally broke free, I felt something was missing in my life. I stopped turning over stones and had a hard time sleeping.

And then one night as I lay under the stars tossing and turning, the stick appeared and began beating me mercilessly. “Shame!” said the stick. “Shame!”

For thirty days the stick held me under its spell without food or drink. During this time I had visions, and it was revealed to me that the warm fuzzy things in the holes were nocturnal. They came out at night and ravaged children. By sunrise they were gone again, waiting in their holes for someone to stick his hand in.

The stick drew a new circle around me. It was much larger, and more a trench than a circle. There was no longer a need for a line.

“These are my last words,” said the stick, “and then I must leave you. Listen well:

“Under stones you’ll find labels like kike, nigger and wop. In the black holes are defoliation and ethnic cleansing. One group sounds worse than it is. The other is worse than it sounds. Now go forth.” And with that the stick vanished.

I wrote these strange events down as a children’s story and called it Sticks and Stones, but no one would publish it.