the machine of the future 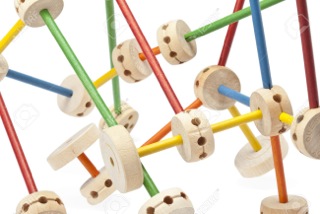 THE MACHINE OF THE FUTURE

The machine grinds to a halt. The Tinker-Toy people open the hatch and the Tinker-Toy captain climbs down a red plastic ladder to the ground, one jerky Tinker-Toy rung at a time.

On the ground there’s a commotion: 46 bouillabaisse people up for promotion; one governor up for election; two mystics and a sales rep from the co-op. Louisiana prawns, a beef tongue and lamb brains. Two onions four carrots and a rash of red pepper.

The Tinker-Toy captain puts a bullhorn made of Cheerios to his mouth. “We have not come to harm you,” he says. His voice is high-pitched and dry as balsa wood. He wants a response but they’re waiting for more.

His skepticism confirmed, he gives the signal. An erector-set ramp is lowered out of the machine and barrels of crude oil are rolled out. The bouillabaisse people give a cheer.

Fourteen dominoes with Tinker-Toy legs march down the ramp. They punch holes in the barrels of crude with ice picks. Rivulets of oil run through the crowd. The Tinker-Toy captain lights a match.

“Run!” the sales rep calls out, but it’s too late. The Tinker-Toy captain drops the match.

“Are they the future, mommy?” a small child asks her mother.

“Hush,” says her mother. “Do you want them to hear you? Of course they’re not. They’re just passing through. How could they be the future? How could such a thing come to pass?”

Tagged as John Bennett, Poetry, shards, THE MACHINE OF THE FUTURE