a place without peers 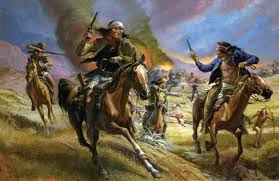 A PLACE WITHOUT PEERS

He was a liar and his pants were on fire. Chestnuts roasting on an open fire, one of those quaint Navajo torture routines. Savages, the whites called them, although genocide never occurred to them. The whites specialize in genocide. Systematic eradication of just about anything. That’s what set them apart from the savages, their penchant for orderly extermination.

This is an example of how one random sentence can open up a Pandora’s box of sentences. Random incisions.

Buffalo chips and a fertilized prairie. Home on the range.

I listened to Terry Gross interviewing Philip Roth on NPR and felt nothing but scorn. For both of them. Not envy disguised as scorn, plain and simple scorn. Scorn in passing, walking through the house naked on my way to a hot bath after a hard day’s work. Terry Gross isn’t Oprah, but she’s the best the cream of the literati can hope for on NPR. NPR is how the genteel live dangerously. How they get out there on the edge of the great prairie of the mind, devoid of savages and buffalo chips since the whites did their genocide thing and began broadcasting New Age music into the emptiness.

Celine said he pissed on it all from a considerable height.

“Dancing in the rain!” sings Gene Kelly, and goes tap dancing into a torrential downpour.

I just phoned in an order for another ten cans of tobacco from the Indian res–a token reparation. I’m going to kick my afternoon espresso intake up a shot or two.

I’ve breeched the walls of Self-Censorship with my renegade band of savage inspirations. We’ve roasted Philip Roth’s balls on a spit. We expect swift retaliation, the cavalry riding in any day now in their trail-dusty blue uniforms, bugles blaring, sabers drawn. Scorn vs. Blind Hate.

Hold your ground long enough and you reach a place without peers.

Tagged as A PLACE WITHOUT PEERS, John Bennett, Poetry, shards