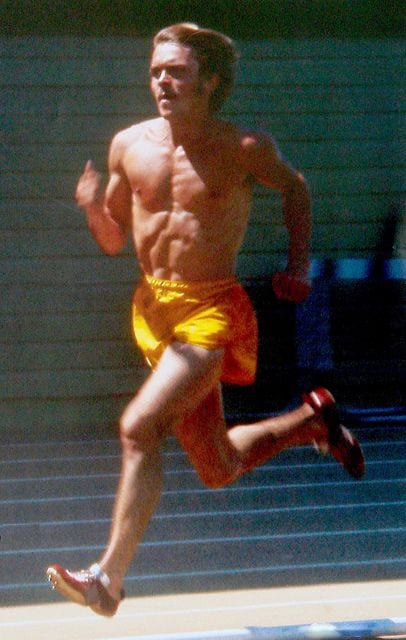 Twelve years ago they sliced me open and replaced most of my iliac arteries with what looks like Ace Hardware tubing. Three days later I tried to escape out of ICU but was apprehended. Three days after that I feigned a bowel movement and got to go home. Two weeks later I was back cleaning windows and ripped the stitching loose, so they sewed in a 6×9 patch of mesh to keep my insides from flopping out. Seven months after that they went in again and sewed up all the little hernias that were popping out along the edges of the mesh.

After a year they wanted to put me on a special treadmill to confirm their prognosis. I was about to decline the offer when the physician casually mentioned that this thing increased speed and incline in increments from one to ten and the only person he’d ever seen take it all the way to ten (and then turn around and run backwards!) was none other than Steve Prefontaine, a one-time Oregon distance runner and a one-time hero of mine.

“Okay,” I said. “Let’s do it.” I was out to tie Steve Prefontaine’s treadmill record.

They had electrodes hooked up all over my chest. They had a gurney nearby and a nurse on one side of the treadmill, a doctor on the other. There was a burly guy with a beard in surgical scrubs, his ponytail tucked up under a hair net, seated behind a control panel with wires running out of it into the electrodes attached to my body. It was supposed to start beeping if it looked like my heart was going to explode.

They told me I only needed to take it to level two to get the readings they needed, but not to push myself if I felt dizzy or out of breath before I got that far.

I took it to level three, grinned over at the doctor and winked at the nurse. I hit level four and the doctor said, “Okay, that’s enough, shut it down.” But the burly guy in surgical scrubs couldn’t find the off switch among all those dials and toggle switches and blinking red lights, and the treadmill kicked into level five.

I let go of the support bars and my arms fell into running position. I began pumping. I was drenched in sweat and my legs were like rubber, but I kept going. I was in 10-K mode, coming down the homestretch and gaining on Steve Prefontaine who looked over his shoulder in panic. I tried to give a victory cry, but it came out a raspy squeak, and then the burly guy jumped up from behind the control panel, wrapped his arms around me from behind, and yanked me off the treadmill. He slammed me down on the gurney and the doctor and nurse began working on me.

The test was inconclusive, the doctor told me, the control panel malfunctioned, they’d do it again in a few weeks.

They gave me a glass of orange juice and a tiny Baby Ruth candy bar and turned me loose.