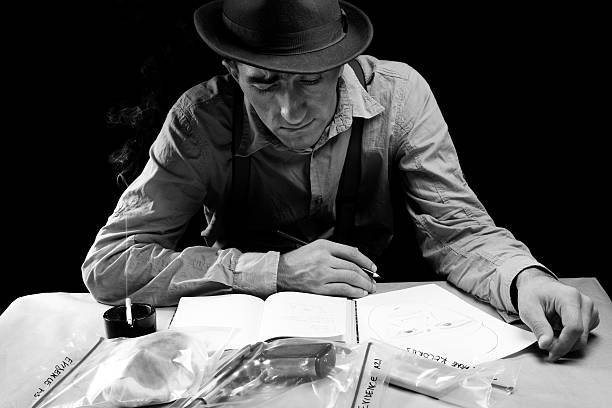 So what is it, this compassion, when it’s not genuine? Pity? Altruism? Love? Joy?

This shrink’s evaluation has his head all fucked up. It might cost him his badge.

Murder was a comfort to him. He’d be sitting in his office, his feet up on the desk and his hands locked behind his head, working a toothpick around in his mouth, and the chief would walk in and say something like, “Kelley, there’s been a murder down in the garment district. Get down there and check it out.”

His body would unwind in one motion and he’d be out the door, snatching his hat off the hat rack as he passed it. What’s figurative about that? He was alert and calm, he was happy. A murder was the only thing that made him feel this way, arson didn’t do it, neither did grand larceny, and sex–well, sex caused turmoil in his head and left him depressed afterward. Why didn’t the shrink say, “Sometimes there’s sex in his heart, sometimes compassion?” Better yet, “Sometimes there’s sex in his heart, sometimes murder.” What this compassion shit, anyway? He and the shrink spoke different languages.

Committing murder had nothing to do with it. The murder itself filled him with peace. That’s why he was so good at what he did. That’s why he always got his man. He’d pull the sheet back and look down at the corpse, still in its chalk outline, and something would surge through him, something better than sex. Was this compassion? Fucked if he knew. Goddamn the shrink to hell and back for filling his head with all these words that muddied the waters, that robbed him of the clarity he needed to do his job.

In his ten years as a homicide detective he’s brought 36 killers to justice, 9 with his pistol and the rest stood trial without one acquittal. Some kind of record.

They called him Killer Kelley down at the station, it was a sign of respect, of affection. And then that creep journalist got wind of it, the Killer Kelley thing, and started nosing around. The next thing you know there it is splashed all over the front page: KILLER KELLEY–ARE OUR STREETS SAFE?

No way there’s not going to be an investigation after that. Everyone was covering his ass, from the mayor on down.

And now they were taking him off the street and sticking him behind a desk, and for the first time in his life, Detective Kelley had murder in his heart.