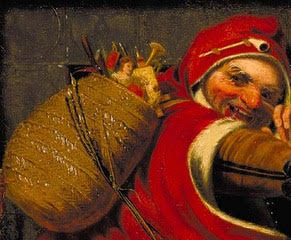 Saint Nicolas was a fourth-century A.D. Turk with a good-sized harem who one day flew off to Holland to add a little color to the way the Dutch celebrated Christmas.

He didn’t have reindeer and a sled, he glided in on a magic carpet playing a flute and wearing a turban, pantaloons and a gold-braided vest. He made the sign of the cross backwards, had a twirling black mustache, and spoke twelve languages, one for each apostle.

Things went well for awhile, but then like everything else the western world gets its hands on, he got commercialized.