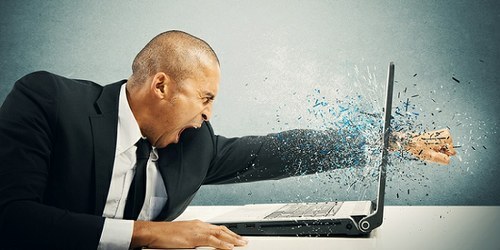 He stared at it for a long time, his cell phone, while sitting at his desk in the dark house. Then he threw it to the floor and stomped it to pieces.

This unleashed something in him. He grabbed hold of his computer, yanked it free of its connections, and smashed it to the floor too. He stomped in the screen and it flashed blue and white light. He kept stomping it until it lay quiet.

His wall-mounted TV was next, and then he toppled his entertainment console and his DVDs and CDs scattered across the living room rug.

He went back into his study and demolished his printer. Then he lost it completely and went for the toaster, the microwave, and the blender. He stood in the wrecked kitchen clenching and unclenching his fists. The cat sat on the counter top and watched him.

He took a flashlight out to the garage and began ripping open cardboard storage boxes until he found what he was looking for, his old dial telephone. He brought it into the house, plugged it into a wall jack, and got a dial tone. This seemed to calm him. He sat in his swivel chair and rocked back and forth, listening to the dial tone.

He retrieved his old address book from a bottom drawer in his desk. Using the flashlight, he thumbed thru the pages and began writing names and phone numbers on the back of an envelope.

He replaced the address book in the drawer, lit a cigarette, and began dialing. Three no-longer-in-service messages, and he hung up.

The cat came in from the kitchen, jumped up in his lap, and began to purr.

Outside on the street people were welcoming in the new year by setting off firecrackers, rattling noise makers, and yelling at the top of their lungs.