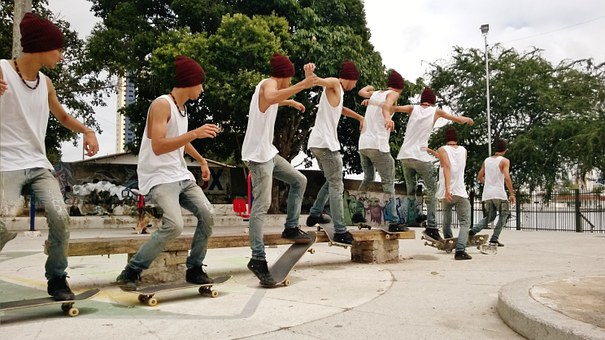 They’re on the hill again. The two little boys I’d seen the day before who’d filled me with happiness by leaning out the back window of a Ford Taurus with their arms spread wide and exclaiming, “Look, Ma! The mountains!” But today they’re on motorized tricycles that, for being no more than four years old, they’re quite adroit at handling. They’re spinning furious circles on the blacktop, one behind the other, oblivious to the mountains they’d been so taken with yesterday. Their mother,young, attractive, sits on the hood of the car, smoking.

“Cute kids,” I call out from my open window over the whine of the tricycles, flourishing my own cigarette in a smoker’s bonding gesture. She looks over at me, smiles, and looks away again.

And then I remember the pogo stick in the trunk.

I get out of the car, startling the mother on the hood of the Taurus. I grin and skip back to the trunk, open it and pull out the pogo stick. I wave the thing over my head and the mother flicks her cigarette into the road. “Kids. Let’s go kids,” she calls.

I spring onto the pogo stick with the alacrity of someone who’s spent his life with the circus, my head filling with ancient lost memories, boinging around the center ring with the clowns, my sorrow painted over with a grease-paint smile, the children in the audience screaming and laughing. “Look, Ma! Look at the clowns!”

I’m bouncing high now. I bounce right over one of the kids. I’ve caught their attention. They stop circling, their motors idling, their faces somber, looking for a classification in their meager life’s experience into which they can fit me. They can’t come up with one, and they begin crying.

Their mother slips off the hood, yanks the kids off their tricycles, opens the back door of the Taurus and tosses them in. The riderless tricycles idle off until they bumped into a pine-wood fence.

I’m still on my pogo stick, bouncing higher than ever. I do a somersault in mid-air, land upright, and keep on bouncing.

“Look, kids!” I call, bouncing back and forth over the Taurus. “The mountains! What about the goddamn mountains?”

The kids are screaming their lungs out, and their mother locks all the doors and goes for her cell phone.

I can hear the sirens in the distance, and then there they are, three squad cars with flashing red and blue lights, wailing up the one-way road the wrong way.

I clear the length of the first car and crash down on the hood of the second, hit ground in front of the third and go airborne again. But my stick catches on the windshield, and I roll along the roof, bounce off the trunk, and hit the asphalt.

I’m flat on my back with the wind knocked out of me and two cops approaching with drawn pistols. But before they reach me they’re knocked off their feet by two long-haired teenagers on skate boards who come to an abrupt halt on either side of me, hoist me up, and kick off with me between them, poised on their boards and gaining speed on the downhill grade.

They ignore my request, and when I look over my shoulder, I see a phalanx of boys on skate boards coming up fast behind us. One of them has my pogo stick tucked under his arm.

I realize this is what becomes of small boys who never stop throwing their arms wide to the mountains, and that I’ve become part of the latest threat to Homeland Security.