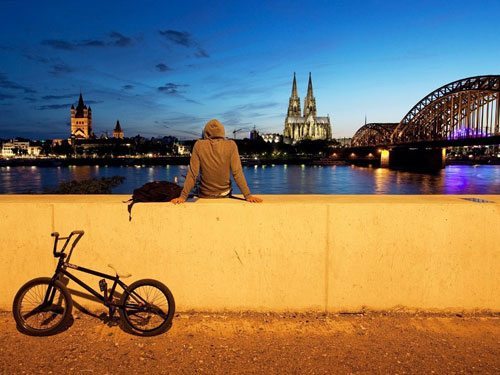 Seltsam im Nebel zu wandern, kein Mensch kennt den andern, jeder ist allein… a poem in German by Herman Hesse, reading it along the banks of the Rhine in Cologne on lunch break from the cosmetics warehouse where I worked after getting out of the army, a Gastarbeiter, “guest worker,” back before the Gastarbeiter became a permanent resident and took over half the country, an illegal Gastarbeiter at that, an American Gastarbeiter, a real oddity, drunk on lunch break.

Hell, the whole crew who worked the floor was drunk, we drank beer on morning break and lunch break and we carried it on the carts we pushed up and down the aisles filling orders for the drivers who wheeled in in a cloud of dust in their Audis and BMWs. The drivers would drink beer with us and then roar back into traffic half drunk, the whole country was drunk, it was my kind of country.

On my last day before I left for the States they presented me with a photo they’d taken a week earlier with me up front and smack-dab in the middle, and scrawled across the bottom the inscription, “Für den verrückten Ami! Gute Reise!” For the crazy American–have a safe trip!

It was one of those rare times in my life that took exception to Hesse’s poem, but overall he proved to be right.