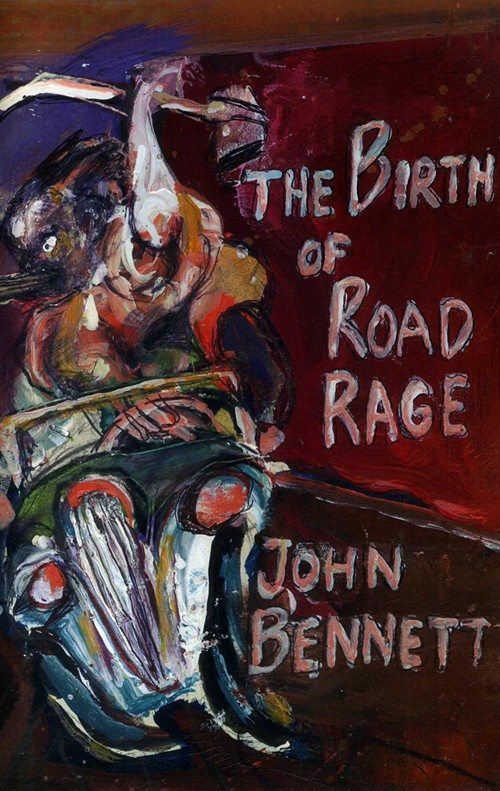 Cover art by Don Brontsema | click the image to enlarge…

“The Birth of Road Rage” is part of a trilogy. The other two books in the collection are: “The Theory of Creation” and “War All the Time.” All three books are available from Vagabond Press (605 E. 5th Ave., Ellensburg, WA 98926) for the pittance of $9 each, $20 for all three, postage included in all cases. For those of you tied to institutions that will not order a book without an ISBN tattoo, you’re shit out of luck. Vagabond Press is kicking the ISBN habit.

Thanks to the following magazines, presses and /or web sites which made some of these Shards available to a limited public prior to this publication:
Babel, Burnig Whisper, D-press, House Organ, Los Poesy, Lummox, Measured Steps, Open Wide, Physik Garden, Pudding House, Real Living, WordWrights.

Confessions of a Man Insane Enuf to Talk to Himself – Who I Be – It’s a Cyrano de Bergerac World – He Could Have Been a Contender – If It’s the Last Thing I Ever Do – Life is a Boston Tea Party – New Things to Fonder – No One Loves a Kamikaze – Thank God for the Diving Bell – In a Frenzy of Celebration We Lock Out the Beast – I Know for a Fact – When True Awareness Dawns – Snake Skin – Hunker Down – Getting Ready for Work – Sky Pilot – Concertina-Wire Payback – Howard Hughes has Nine-lnch Nails – Fly & Buy – Fitting In – Shilling Gears Like a Truck Discovering the Child Within – Thwack! Thwack! – As Usual, As Always, Ad Infinitum – Looking – Point the Way – Monkey See, Monkey Do – Sweating the Small Shit – Run with the Hunted – Reaching an Audience – Tricks the Universe Plays – Frankenstein Mythology – Just an Average Joe – Getting to the Core of the Problem -Subpoenaed – The Boy in the Bubble – Chattanooga Choo-Choo – Tiny Tim & the Stompers – Processing the Dream – Happiness is Much Over-rated – Reality Lurks in the Shadows – Tantamount to Treason – Some Advice on Aging Gracefully – The Apocalypse, Plain & Simple -The Birth of Road Rage