all the news fit to print 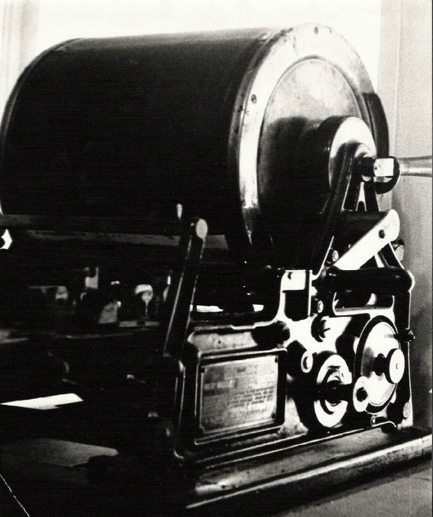 All the News Fit to Print

I set it up on a bench on the corner of 5th and Main. I slapped a ream of paper into the feed tray and began cranking the handle. I’d already mounted the stencil before I left the house, the drum was inked, and the printed pages came floating out. Buck-a-chin, buck-a-chin was the noise it made as I cranked the handle.

Everyone passing by came to an abrupt halt, and soon there was a large crowd, spilling into the street and disrupting traffic. Horns began to blow and two patrol cars with flashing red lights sounded their sirens to clear a way to the curb.

“Okay, buddy, what’s going on here?” the first cop to reach me said. He was poised to somehow enter whatever I said into his smart phone.

“All the news fit to print,” I told him, still cranking the handle. Buck-a-chin, buck-a-chin…

“Yeah, what?” said another cop who’d just made his way thru the crowd.

“I recorded it,” the first cop said, and waved his smart phone.

The second cop ignored him and went right to the heart of the matter. “What is that thing?” he said.

I kept on cranking. The tray was filling fast, and people were snatching up pages and reading them, their fingers smudging the still wet ink.

“It says here that it’s a mimeograph machine,” one of the bystanders said. “A way to spread the written word.”

“Are we on line?” one of the cops said. There were six of them now.

“Yeah, what’s that?” said a woman holding a baby in her arms.

“I know,” a college student said. “I studied up on it. This guy must be a monk. That thing is making scrolls. It’s how people used to communicate.”

“Well, it’s causing a traffic jam,” said one of the cops.

“Maybe,” said the college student, “but these monks are holy men — think twice before you book him.”

“He don’t look holy to me,” said the cop. “Suspicious is how he looks. What else is on that scroll?”

“It says we’re products of the products we’ve created,” said the college student.

“Sounds like terrorist talk to me,” said the cop.

“It’s heavy, man. It says people on Facebook are turning digital. That pretty soon computers will be making babies.”

“Call for backup,” said a cop who seemed to be in charge. “And get a shrink down here. We’ve got a crisis on our hands.” And then, to me: “Sir – desist from turning that handle. Shut that thing off and step away from it.”

I stopped cranking and stood back. I was about out of paper anyway. I’d gone thru a whole ream. People were murmuring and passing pages back thru the crowd.

“Hey, what about that amendment thing?” said a man wearing Bermuda shorts and flip-flops. “Freedom of speech and all.”

“Bullshit!” said someone in the crowd, and a roar of agreement went up.

The cops formed a circle around me and my mimeo and unholstered their revolvers, and I lit a cigarette.

The magic was still there.

Tagged as All the News Fit to Print, John Bennett, Poetry, shards