blood of the savior 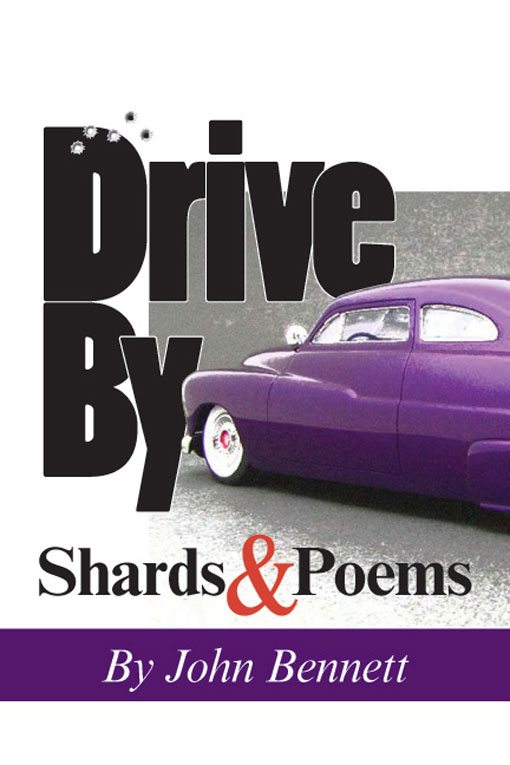 The Shard below is included in the Lummox Press collection of Shards and poems, Drive By. Click this link if you’re interested in buying the book.

Blood of the Savior

My feet are baking in my shoes. I should take them off, the shoes. I should get out of this furnace of a car and walk over to the island of grass. I should take off my shirt, too. Lie on my back on the grass and make whatever noises come out of my mouth straight into the sky. I should tear these ties that bind from me and hold them over my head in clenched fists.

My mind waves aren’t waves. They’re a tumble of right angles with razor-sharp edges. They lacerate. My brain is a hemorrhage. “Stop the bleeding!” the corpsman barked out in special-ops training, and I laughed and laughed and couldn’t stop until finally they yanked me out of there.

A lieutenant sat me down in his office and called me son. I started laughing again. The right angles tumbled and welled. My eyes were blood-shot, the tips of my ears scarlet. When I pushed down with my feet in my shoes I could hear the blood squishing. I had to get out of there.

It was better in the jungle. There were others with razor-blade brains. Not as many as you might think, but quite a few. We’d volunteer for night patrol. We stayed to ourselves. We didn’t do drugs. We chain smoked cigarettes, which we were told was bad for our health. We laughed and laughed. Most of us volunteered for a second tour. A good 30% of us made it home again.

A mother with an angel of a daughter no older than four just walked past my car.

“Mommy, why is that man sitting in that hot car smoking cigarettes?” she asked.

I thought it was a fair question.

Hail Mary, full of grace, remind me to tell you about my time in the seminary. I laughed there, too. I laughed so non-stop hard that they drummed me out the door at 3 a.m. into a blizzard. “God’s speed,” said the Father Superior. The next morning on their way to sunrise service they discovered crimson footprints in the snow. The footprints crossed the grounds and passed through the holy arch out into the world. The snow had fallen all night, but it did not fill the footprints. There was talk of a miracle, but the Father Superior squelched it. He brought in a bulldozer and a dump truck and had the snow removed. They dropped it into the Connecticut River and the river turned crimson.

I joined up at Fort Jackson in Columbia, South Carolina. They asked me what I wanted to do and I said kill. “Yeah, right,” said the enlistment sergeant. Then they put me on a plane to Texas.