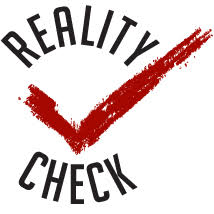 You gotta love a guy who can come up with a line like that. I pull him into my reality and sit him down in a corner.