the tiny door to freedom 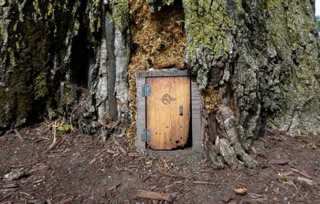 The Tiny Door to Freedom

The truth shall set you free, like a jailer with a key ring, a patch over one eye, and a club foot. Here he comes now, scraping along the wall.

Who gets set free seems random. One day it’s the sexy Scandinavian princess who traded oral sex for cigarettes, the next it’s the ventriloquist with the wooden dummy. The day after that he just drags his foot along jangling his keys in everyone’s face and talking dirty and no one gets set free.

I’ve watched a lot of people come and go, some with names you’d recognize, most as anonymous as a blizzard, but by the time he lets them out, there’s no telling them apart. They all fall down weeping at his feet, which sets him to purring and patting their heads. Then he drags them down the long corridor by the hair and shoves them through a tiny door.

At first most of us are appalled that truth is a jailer with a club foot, and we conjure words like grace and beauty to try to shame him. But he seems to feed on these things, like an ogre in a nursery.

In the long run, everything loses meaning except that tiny door.