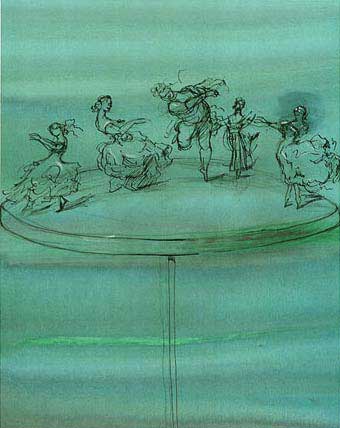 There were times he’d stand on the head of a pin and pretend to be a angel. He tried not to notice that on the needle’s other end, upside down on the glinting point, danced a whole troupe of angels, smooth-skinned and sexless and defying gravity, floating in gossamer. He’d assume postures that he hoped were Greek in nature and let his eyelids droop, but he was no match for the angels.

Later, back in his solitary room in the cheap hotel, he’d boil water on a hot plate and make instant coffee. He’d stare out his shadeless window at the night street below, and sometimes, when it rained, he’d pretend it was the angels weeping out of envy for his majesty. That always brought a smile to his face, but it never lasted long.