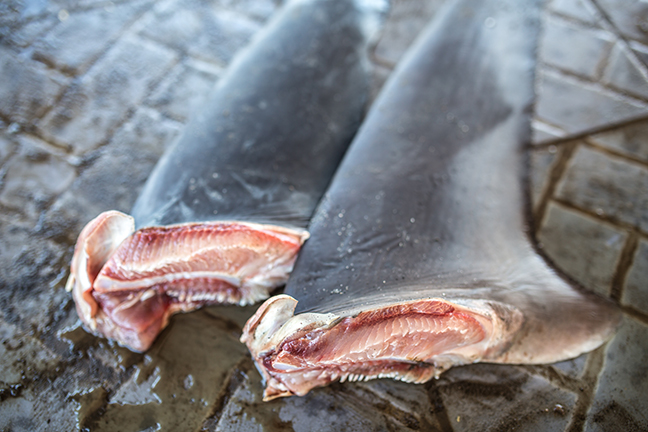 Statistical fact: pop machines kill more people than sharks. But even though I’d still rather be in the water with a pop machine than a shark, I don’t want to put their fins in my soup.

I saw a documentary on a marine biologist who’s been in love with sharks since he was a boy. There he is in his wet suit and face mask, swimming around in a swarm of hammerheads off the Galapagos Islands. At first they stayed clear of him, because sharks have two more senses than we do, and one of those senses was interpreting his rapidly pounding heartbeat as a sign of aggression; but once he calmed down, they came in for a closer look, and before long he’s got his arm around a shark and is stroking its side. The shark seems to have a smile on its face.

Sharks have been around longer than some continents. They are central to the ecological balance of the ocean, which is where we get most of our oxygen. But now, thanks to long-line fishing and the business with the fins, they’re on the verge of extinction–you’re not cool until you’ve had a bowl of shark-fin soup.

Back in the Seventies, Peter Benchley, a speech writer for Lyndon Johnson, among other things, wanted to write a factual book about sharks. He did his research and then had a business lunch with a publisher in New York to discuss the idea. “Write a novel,” the publisher said. “Have this killer shark the size of a whale go on a rampage, rip people apart, capsize boats, terrorize an entire beach-front community. Call it Jaws or something. We’ll make a bundle.” And Benchley did it.

Another myth about sharks is that eating them stimulates virility.

The most advanced species on earth is willing to destroy the planet just to get its rocks off.