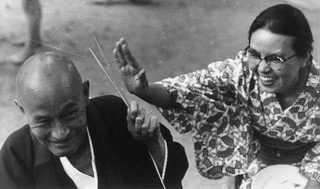 Don’t be a grouch. Don’t slouch. Park yourself on the couch. Sit on your hands and bounce. The springs go onomatopoeic — boing, boing, boing. Sing it out –Boing! Boing! Boing!

The Zen master comes off the rug like a tidal wave and boxes your ears. “Ah, Grasshopper!” he says. “You are such a piece of work!”