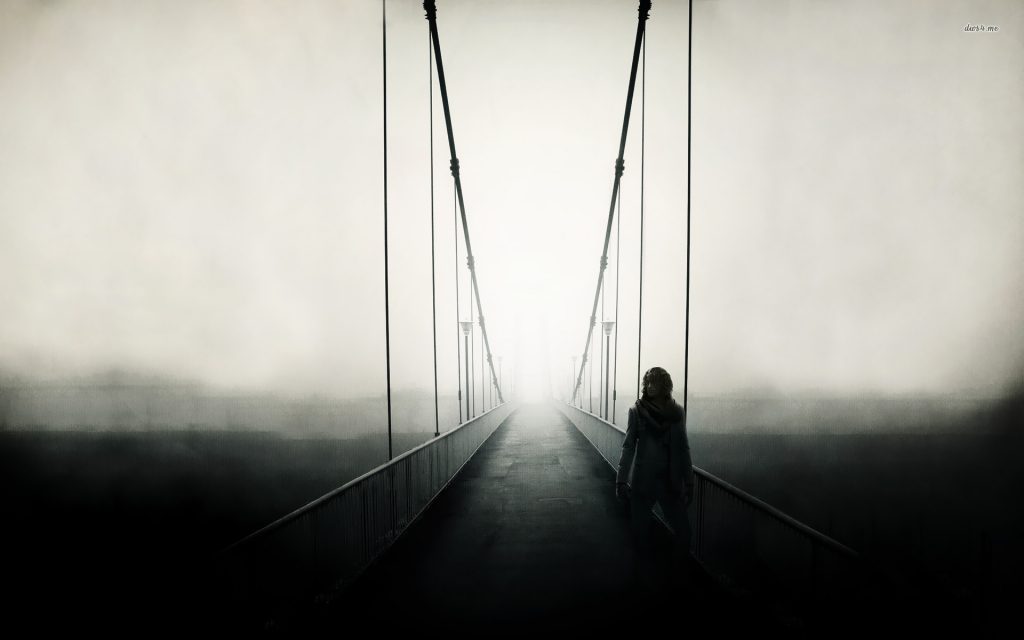 There’s a strange energy in the pen today. It doesn’t want to write words, it wants to paint pictures. I stand on the bridge and watch the river flow. I want to paint that picture, but I lack the skill.

There’s a point at which skill and talent merge, or don’t, so that after enough time goes by, you wonder if you had any talent to begin with. It seems you did. Those early years of copying comic-book characters for hours on end.

The poems started back then too. Six, seven years old. And four or five years later, the harmonica got tossed into the mix. It all sprang out of nowhere. No, it sprang out of somewhere into nowhere — into the wasteland of a bleak upbringing. So that you played “O Susanna” over and over until you stumbled across a chromatic with a button on the end that when you pushed it in, you could play songs you couldn’t play before–the extent of your musical training.

There are no words for what was happening. There is something inside looking for a soul mate–it doesn’t have to be a person. My whole life long this something has been projecting shapes into the outer world like light from a beacon. The light is eaten by darkness.

Why have the words taken prominence in this strange dance? What would happen if I shifted the emphasis to music or painting at this stage of the game?

Talent is a misnomer for something deep inside; skill is competence with tools to let it out.

It’s too late to gain the skill to draw the picture that’s grown inside over the years. Too late to blow my harp around it. Even the words begin to fade.

HCOLOM PRESS is the heir to Vagabond Press, which began as a main player in the Mimeo Revolution of the Sixties and continued publishing right into the jaws of the new millennium. HCOLOM PRESS embodies the spirit of Vagabond Press, retooled for the times we live in.

Hcolom is Moloch spelled backwards. Moloch is an Old Testament deity to which children were sacrificed, a practice society still engages in with increased enthusiasm. Consumerism is the new Moloch, manifesting itself like cancer in war, politics, the arts and religion, in every nook and cranny of human endeavor, draining the intrinsic beauty out of life and mutilating the innocence and magic of childhood with its commercial meat hook. HCOLOM PRESS intends to publish books that by their nature repudiate this pernicious force–novels, poetry, children’s books and books that transcend genre.

Our launch book, in June of 2006, was John Bennett’s novel, Tire Grabbers, a fable of sorts, a reality book rooted in the fantasy of our times, the story of the coming of Moloch and the children who rise up in rebellion against it.

Books of kindred spirit will follow close on its heels. Go for it by clicking here… or hit the Hcolom logo above… or just hit any of the following covers…

Tagged as John Bennett, Poetry, shards, THE THING INSIDE

One Response to the thing inside